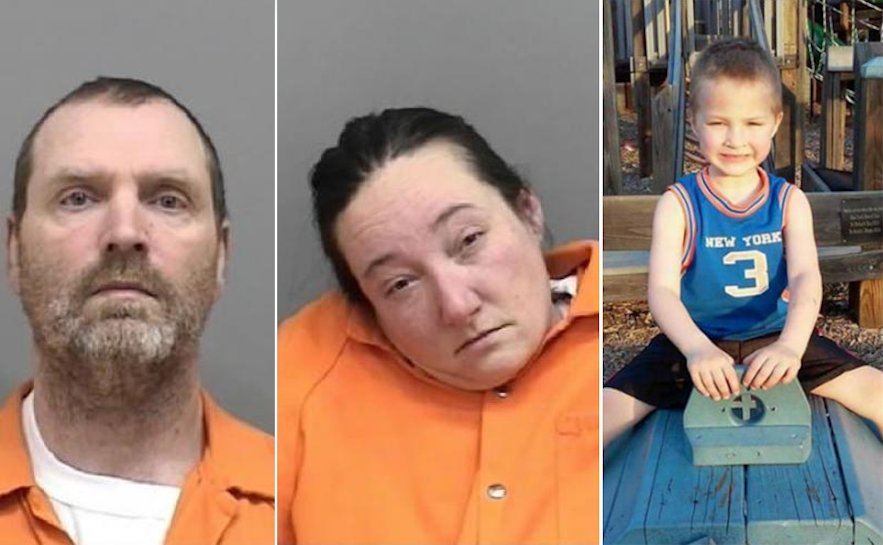 Per reports, both parents, 48-year-old Timothy and 35-year-old Tina were appointed by the court to serve as guardians for the 7-year-old boy Ethan. Although the couple opened their home to the young boy, they did not open their hearts to him. After demanding that the boy read and memorize passages from the Bible, they realized he had not done as they had asked, so they did something unthinkable. Ethan was one part of a set of twins. Although both twins were ordered to memorize verses from the Bible, Ethan was the one who suffered the most from his family’s punishments.

After Tina and Timothy realized that Ethan had not done as they had asked, they reportedly killed him, according to reports related to the boy’s untimely death. Timothy led the punishment. He ordered the little boy to pick up a large wooden log and carry it around the family’s property for hours as a punishment for failing to memorize passages from the Bible. The family had a path around their property and used it as a way to punish Ethan when he did not do his Christian duty of memorizing parts of the Bible after he was told to do so. The log that Ethan was expected to carry weighed as much as forty-four pounds, which was much heavier than the little boy was able to carry by himself.

Timothy may have been the one to dole out the punishment, but he made Ethan’s fifteen-year-old brother Damian supervise the punishment. Damian followed Timothy’s orders and would kick and hit Ethan when he slowed down or otherwise could not complete the task of carrying the heavy log around the family property. Sometimes Damian would stand on Ethan’s back and push his face into the icy ground. Another report suggested that the fifteen-year-old enforcer also rolled the log across Ethan’s chest to make him suffer more. During one punishment, Damian ordered Ethan to hide his body in a massive pile of snow. Ethan did as his older brother ordered, but he passed away only a few minutes later from hypothermia because the temperatures were so low.

In addition to battling the frigid elements, Ethan also suffered blunt force trauma to his head, chest, and abdomen, which did not help him at all. When the police interviewed Damian, he denied everything. However, he did confess to being the one who buried Ethan in the snow. He explained that the burial was part of a punishment for Ethan after he failed to memorize thirteen Bible verses. As part of his punishment, Ethan was ordered to carry the heavy log around the family property for two hours. Authorities charged Damian with first-degree reckless homicide and six more charges related to the murder of Ethan. Timothy was charged with felony murder and five other charges related to Ethan’s untimely death. Tina was charged with failing to prevent bodily harm to a child as well as another charge.

Brutal brawl broke out at funeral 'after widow saw how husband's body was treated'!

Tears filled passerby's eyes 'when he saw what was written on tiny grave' in the middle of the woods!

The ‘chilling text’ mom sent before her body was found burned in a ditch has been revealed!

Baby had to have its leg amputated after ‘careless nurse’ left this sitting next to him!

Dad shot a ‘massive creature’ in front of his home, was stunned when he discovered what it is!