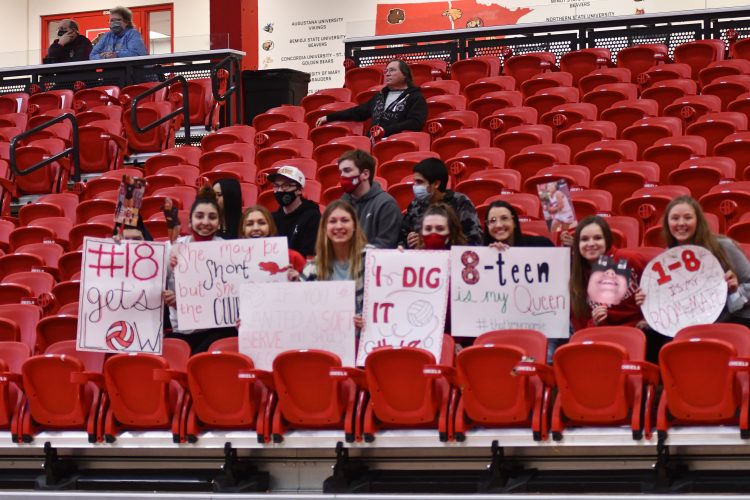 In the first game of Saturday’s doubleheader, Minot was beaten 4-0 as opposing pitcher Tanner Brown tossed a perfect game against the Beavers in a seven-inning affair. Augustana produced four runs on seven hits while no Minot State batters were able to reach base. Brown improved to 2-0 on the season while MSU’s RJ Martinez (2-1) took the loss.

The second game was a different story for the Beavers as they rallied back from a 5-4 deficit after seven innings to win the ballgame 8-5. An eighth-inning homerun from third baseman Ryley Humrighouse drove in three as MSU took the lead at 7-5. Meanwhile, Declan Buckle added some extra insurance with an RBI single in the ninth.

All told, Minot State scored eight runs on eight hits with two errors as Augustana knocked in five runs on 11 hits with three errors. Reliever Jordan Chappell (2-0) was the winning pitcher as he accounted for two and one-third innings of shutout baseball for the Beavers. Meanwhile, Aaron Kern notched his second save of the year in a two-inning appearance.

Sunday’s final game of the series did not go Minot State’s way as they were defeated by Augustana 5-1. Buckle enjoyed a fine performance individually for MSU, going 3-for-4 at the plate with the club’s only RBI of the day. Relief pitcher Trevyn Badger took his first loss of the year while Max Steffens (3-0) earned the win for Augustana.

Now 7-5 on the season, Minot State plans to travel to Wayne State College, in Nebraska, for a doubleheader on Tuesday afternoon.

Following Saturday’s 4-1 triumph over Lindenwood in the Women’s Midwest College Hockey Tournament, third-seeded MSU took on top-seeded Liberty in the championship round on Sunday.

As it turned out, Liberty outlasted Minot State in double-overtime 2-1. After a scoreless first period, it was MSU’s Megan Norris who drew first blood on the strength of an assist by Aspen Cooper with 13:04 remaining in the second. However, Liberty answered back with a goal late in the third to tie up the game, sending matters into overtime.

In a hard-fought battle, the two clubs needed an extra overtime session to determine a winner. One minute into the second extra period, Liberty was able to secure the victory by scoring the game-winning goal.

Next up on the schedule, the Beavers plan to face Dakota College at Bottineau in a home-and-home set starting on April 2. Playing the first game in Bottineau, MSU will wrap up the series at the Maysa Arena on Saturday, April 3 at 4 p.m.

In men’s hockey news, Minot State announced they will wrap up the regular season with a home-and-home set against the Jamestown Jimmies on April 6 and 7. The Beavers will travel to Jamestown on Tuesday April 6th, and will then host the Jimmies at the Maysa Arena the next day. Both games will not count for the national tournament seedings.

Push for fourth $1,400 stimulus check supported by more than 60 lawmakers as Americans struggle in pandemic