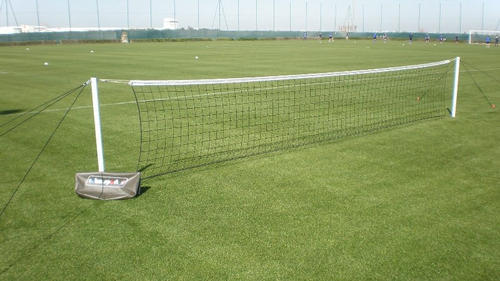 Things were back on track for the Blue Jays at Bismarck St. Mary’s on Tuesday.

The Jays defeated the Saints 6-1, repeating what happened when the two teams met for the first time this season back on April 9. JHS is now 2-0 against St. Mary’s and 3-2-2 in the West Region. The Saints remain winless at 0-7-0. The Jays will be back in Bismarck on Friday when they take on Century at 6 p.m.

Sara Sletto was the Jays’ only repeat scorer, putting goals in the net first with two minutes to play in the first and then with 20 minutes left in the second.

The Jays momentum kept flowing with scores from Breanna Oettle, Claire Frohlich and Allie Windjue. Junior Haley Nelson clinched the Jays’ last score of the game with 9:30 left in regulation.

“It was nice to see the girls finish tonight,” Harty said.

Unfortunately, it was not quite enough.

The Blue Jays fell 7-2 to Bismarck Legacy at Jamestown’s Bolinger Courts. Phoebe Olson, the Jays’ No. 1 tennis player, was a part of both wins. The JHS junior defeated Camryn Beasley 6-3, 6-2 in the singles frame then partnered up with Lauryn Hibl to take on Beasley and Sierra Kroll in a three-set showdown.

Jamestown’s Olivia Schriock tosses the ball in the air for a serve Tuesday, May 4, 2021 at Bollinger Courts. John M. Steiner / The Sun

“The No. 1 doubles match was a fun one to watch and pretty high caliber tennis,” coach Olson said. “Beasley and Knoll are a good doubles team and beating them is an accomplishment. Lauryn and Phoebe finished the match strong with a tiebreaker win in the third.”

The team is expected to be back competing against Bismarck Century on Tuesday at 4:15 p.m.

Attorney for man accused of killing 4 asking to leave case

McFeely: SDSU gives Bison taste of their own medicine