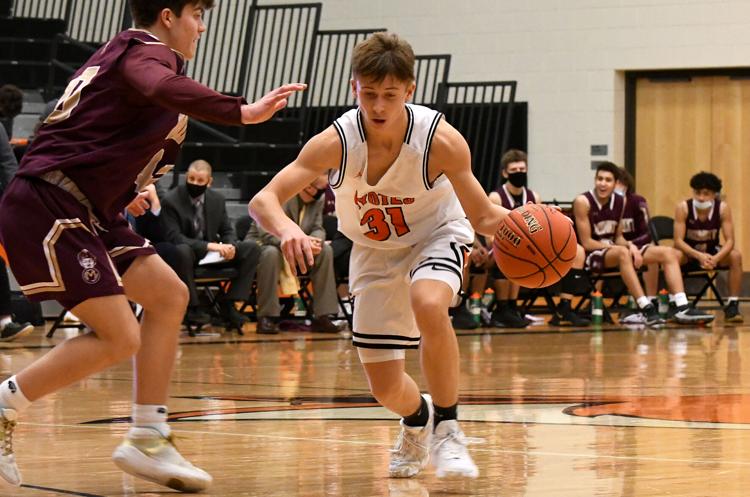 MINOT, N.D. – Just two days after getting their first win of the season, the Williston High School boy’s basketball team could not get momentum going and lost its eighth game of the season.

Minot used a big first half to propel themselves ahead of Williston and get such a big lead that the Coyotes would have had trouble getting back into the game.

In the first half, Minot scored 57 points, compared to Williston’s 26.

Williston didn’t shoot the ball poorly, and as a team, the Coyotes rivaled Minot in a lot of statistical categories. The issue was, though, that there were a few key areas where Williston either got hurt or hurt themselves in the game.

Mainly, turnovers were an issue for Williston.

The Coyotes had 24 turnovers in the loss, compared to the Magicians’ 16. In tune with turnovers, Minot recorded 10 steals and eight deflections, to go along with 33 points off turnovers.

So while Williston was able to get good looks and opportunities to score, Minot’s defense and transition game gave the Coyotes trouble.

But going beyond second chance points, Minot simply had a good offensive output.

Williston showed some good things offensively, nearly matching Minot in a few categories. The Coyotes shot 30.8 percent from three-point range, and they scored 28 points in the paint, compared to Minot’s 36.

While individually, each player did not score a lot, Williston did have nine players score. Edens Dumervil led the team with 10 points and 15 rebounds, and Jake Wilt and Ethan Moe each had seven points to help out.

Minot had a good variety of scoring, as 11 different players scored. Minot’s Deonte’ Martinez led everyone with 28 points, and Eric Wentz (18 points) and Darik Dissette (16 points) each also poured in some baskets for Minot.

North Dakota and Denver Square Off This Weekend