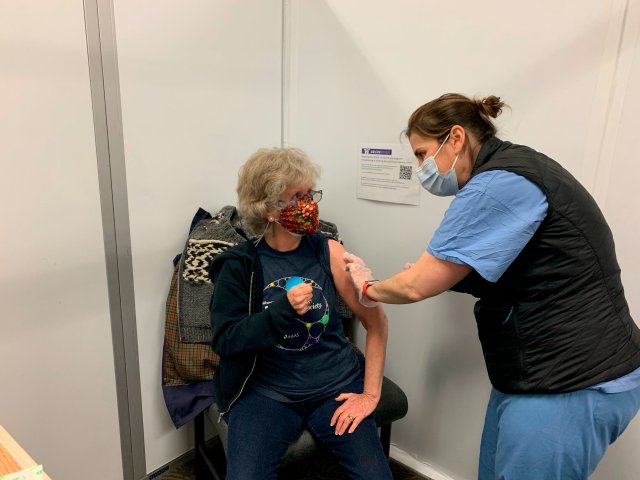 Keri Nasenbeny, associate chief nursing officer at UW Medical Center – Northwest, administers a Moderna COVID-19 vaccine to Tyson Greer, 77, early Friday, Jan. 29, 2021 in Seattle. Hospitals rushed out COVID-19 vaccines to hundreds of people in the middle of the night after a freezer they were being stored in failed. (Evan Bush /The Seattle Times via AP)
Coronavirus

MINOT, N.D. – At Monday night’s Minot City Council meeting, First District Health Unit gave an update on where they are with the vaccination process.

Nine percent of the population in Ward County has received their first dose of the COVID-19 vaccine.
A little more than two percent have had their second dose.

Executive Officer Lisa Clute says they are currently aggressively vaccinating the 75 and older population. In the next few weeks, they hope to have that phase complete and then they will move on to the next group.

“When we do move to the next group it will be healthcare provider by invitation first so they will be contacting their patients. They will do that the first week,” said Clute.

She says anyone who is eligible for the vaccine now should contact First District Health Unit to set up an appointment.

Legally blind skier from Minot takes on the Big Couloir

There have been 611,511 total vaccine doses administered in North Dakota