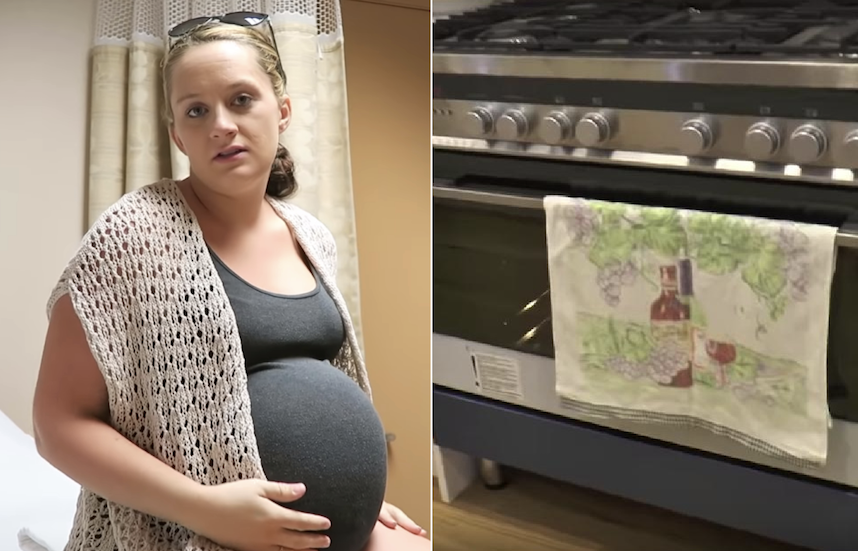 Husband left wife at 8 months pregnant, weeks later ‘she found this in the oven’!

According to the brave woman, Amanda, she and her husband reportedly spent 3 years trying to get pregnant, and she was ecstatic when she found out she’d finally conceived. The couple finally moved into the house they’d been renovating, and Amanda settled into the bliss of her blessings. Needless to say, she was stunned by her husband’s announcement that he was leaving. He followed through on his words and disappeared, leaving 8-month pregnant Amanda scrambling to keep up with the piling bills.

Amanda’s friend Anna, watching her friend drowning in the challenges of her new situation, decided to write a letter to a local radio station. She wanted Amanda to get a chance to appear on the station’s “give back” segment. The show decided to host Amanda after hearing her story. Anna and Amanda were invited to the show, where Amanda shared her story, and the hostess announced a special “Give Back segment.” “It’s been about five weeks since it happened,” Amanda told the show’s listeners. “And the biggest thing is just the shock, I guess because it wasn’t really what we planned, or what I planned.”

She was devastated that her plans were all gone now, and she was trying to find other options. She shared that she really wanted to keep the house and raise her kid there, not worried about the financial aspect of it. After she’d shared her story, the hostess asked Amanda to look at the screen set up behind her. She watched as her house appeared on the screen, and the hostess told her that they’d be taking a virtual tour of the house. Amanda was surprised to see a vacuum cleaner sponsored by Scrubb Online Cleaning Service just inside the front door. As the video showed the house, filled with packed boxes, the tour guides opened the fridge, stocked by Eat Fit Foods. The company had agreed to deliver fresh meals daily for three months. One less thing for Amanda to worry about.

The table was stacked with baby gear, including a stroller, car seat, change table, baby monitor, and others. Baby village threw in a $1000 voucher for baby photography in addition to the $4,000 baby gear. With tears in her eyes, Amanda watched as the camera panned to the oven, which had a towel hanging over the handle. When the oven door was opened, Amanda almost fell off her chair. Bundled together was a wad of cash, $10,000 donated to help pay her mortgage. Anna, sitting next to her friend, showed as much excitement as Amanda, happy to have been a part of the blessing. I can’t tell you how much this means to me…” Amanda said, crying uncontrollably. We are republishing this story in light of recent reports that suggest more and more people all across the country are experiencing random acts of kindness even amid the challenges of the pandemic.

Thief 'looked at wallet he stole from petrified person', turned himself in after looking inside!

Brutal brawl broke out at funeral 'after widow saw how husband's body was treated'!

77-year-old convict deemed “too old to be a threat” gets released, commits almost identical crime again!

Mother ‘caught incurable disease’ after janitor at work did something brutal with her water bottle!

Little girl comes home with a stack of cash, her explanation gets everyone surprised!

Student flashes her panties in public, claims it’s a form of protest!