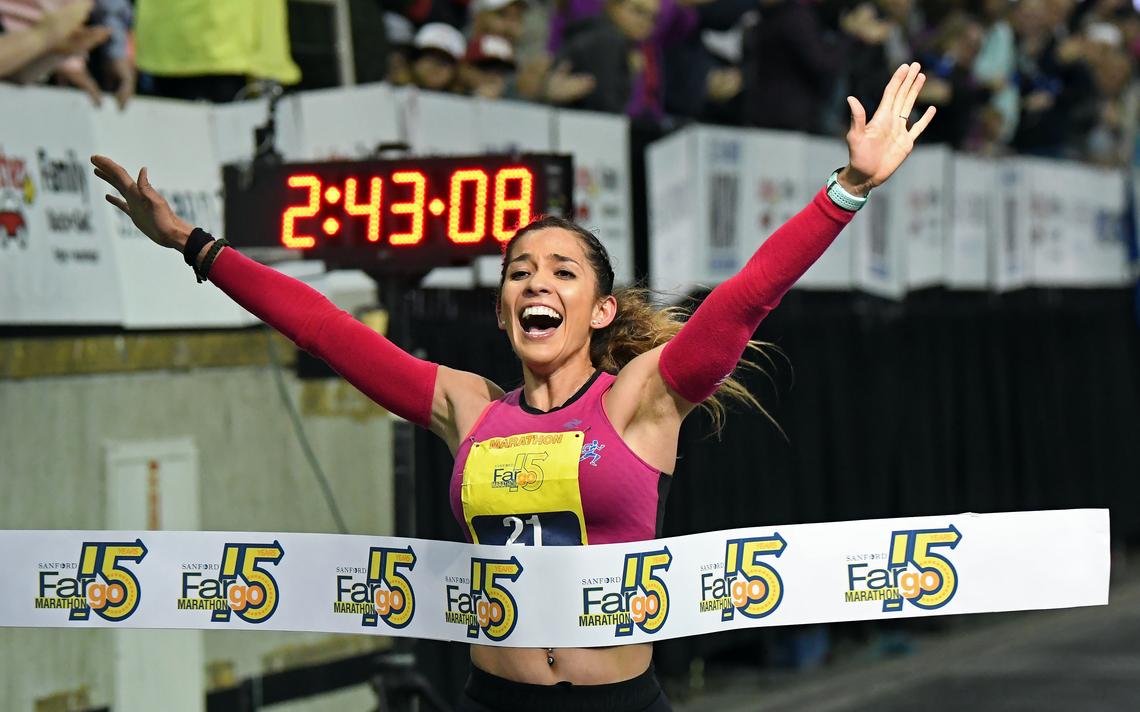 MINOT, N.D. — Three years ago Val Curtis of Minot set a goal to earn a spot in the 2020 Olympic trials for women’s marathon. On Feb. 29, she’ll be at the starting line in Atlanta to fulfill the dream.

“I’m really excited that I accomplished a goal of mine and something that I worked for for so many years, but part of the excitement of race day will be lining up with my heroes and the people that are going to be going to the Olympics,” Curtis said.

Although she doesn’t expect to capture one of the three Olympic spots, she hopes to finish in the upper half of a field expected to include around 500 female runners.

“I’m going to push myself and try the best I can and get the best out of myself that day,” she said. “I’m just totally honored because I am a very big fan of running.”

She earned her spot by winning the Fargo Marathon last May with a qualifying time of 2 hours, 43 minutes and 8 seconds. Women runners must finish a certified 26.2-mile event in 2 hours, 45 minutes, or less to get into the trial.

For Curtis, the trials bring her full circle from the first marathon she ever ran, which was in Atlanta nine years ago. She finished that race in 3 hours, 42 minutes.

“I never guessed after running that marathon that I would be where I am,” Curtis said.

Curtis, 33, grew up in the Salt Lake City area and participated in track in high school and competitive running at Southern Utah University for a year, where she met her husband. When her husband, Chris, transferred to the University of Nevada-Las Vegas, she followed and they graduated in 2008.

During her husband’s 12 years of active duty with the Air Force, they have relocated a few times, most recently to Minot 2 1/2 years ago. Curtis’ level of commitment to running varied over that time, and she didn’t run her first marathon until 2011, when her daughter was a year old.

After her son was born in 2012 and they moved to Hawaii, she began working out year-round.

“There were races all the time in Hawaii. So I actually raced quite a bit and I felt like that was kind of the start of my consistency,” she said. “Still, definitely not as intense. The intensity wasn’t there and that’s something that has built up gradually.”

Her commitment to reach the Olympic trials formed in 2016 after watching a broadcast of that year’s trials. She stepped up her training mileage to nearly 100 miles a week at its peak and averaged two marathons a year, staying patient about her progress to avoid the risk of injury. Her goal was to run a trial-qualifying time at a Houston marathon in January 2019.

At the time, she had been self-training, using a book by world-renowned coach Jack Daniels for her running strategies. Before the Houston marathon, she began training under coach Matt Nark of New York, who instructs her through an online training app. Nark helped her take seven minutes off her time in three months. Still, she missed qualifying in Houston by about 42 seconds.

“I knew I was super fit,” Curtis said. “So I told my coach, ‘I want to be too fit to fail,’ because I know what North Dakota (weather) is like. I said I don’t want a windy day to ruin my goals. I don’t want horrible conditions, which it was.”

The day was rainy, in the 40s with a typical North Dakota breeze of 15 mph — coming as headwind for most of the last six miles.

Curtis’ time on the first half was where she wanted it, though, and she then focused on chasing down the two female runners ahead of her.

“Even though I was running into a headwind, I was running faster than any of my other miles,” she said of the final segment of the race.

“I experienced something I’d never experienced before, where I had this tunnel vision and almost like an out-of-body experience where I just was very in the moment and felt this energy. I could just focus on what was in front of me and I didn’t look at my watch. I just felt so strong.”

Even so, seeing her time left her in shock.

“It was such a big moment for me,” she said. The first person she picked up her phone to call was her husband. Chris was deployed to Guam and following the race online but because of update delays, he didn’t learn of her victory until that call.

Curtis continues to train with Nark in preparation for the Olympic trials. She does strength training in addition to six or seven days a week of running. Typically, she has two hard workout days a week that contain running segments totaling 18 to 22 miles each day.

Other days involve more relaxed running of shorter total distances, often split into morning and afternoon segments. Her weekly regimen varies, though, as she slowly rebuilds between marathon events.

A substitute teacher, Curtis typically schedules her running for early morning and after school. She will train outside down to minus 20, but ice and snow in the winter sometimes force her to the treadmill.

Marathoners typically don’t run more than two full races a year because of the physical demand. However, Curtis slipped in a third marathon in 2019 last November in Indianapolis. Due to injury, she since has had to back off her training a bit. Although she now feels back to 100%, she hasn’t pushed for a higher weekly mileage.

“I’m not doing more than I have in the past, but my coach also says he doesn’t feel the need to because of how many marathons I’ve done, kind of back to back,” she said. “I feel like I’m more fit than my last cycle, so I’m able to do the same – if not more- with even just a little bit less miles.”

Beyond the trials, Curtis has goals yet to reach.

“I know I want to keep improving,” she said. “I’m not done yet. I haven’t plateaued yet. So I’m excited that I still have more ahead of me.”

“It’s kind of nice to have goals like that because it’s not based off of performance. It’s just for the love of running,” she said. “I just love running so much, and I want it to be a part of my life as long as possible.”