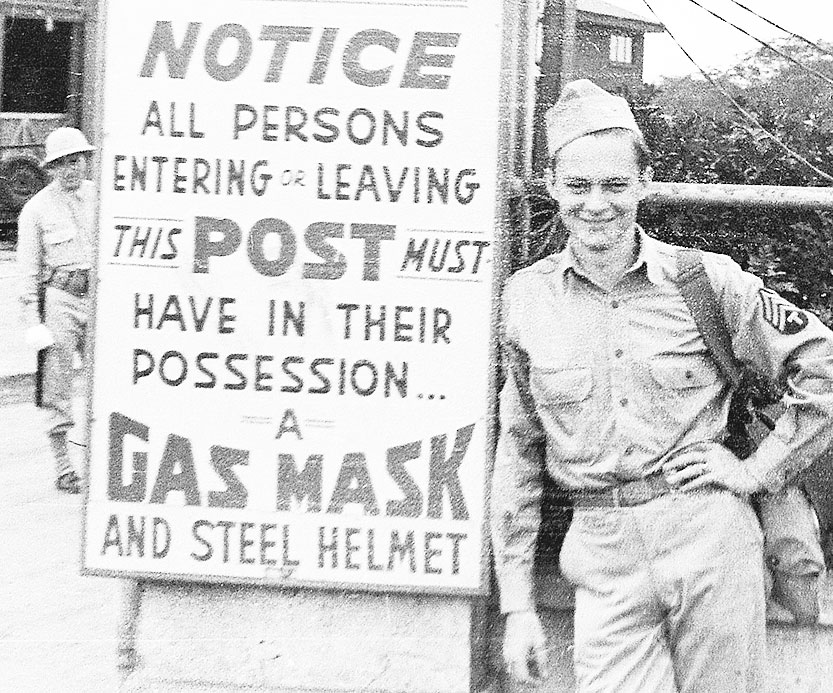 MINOT, N.D. – Siblings Dana Perkins and Alice Smith are hoping people in North Dakota and other areas in the country might be able to help them identify a large collection of photos that their father took while he was stationed in Hawaii in the 1940s after the attack on Pearl Harbor.

When World War II veteran Richard Erlon Perkins died several years ago at the age of 92, his son, Dana, of Saco, Maine, and daughter, Alice, of Yarmouth, Maine, found the large tin filled with rolls of film negatives at his home. The film negatives had never been converted into photographic prints.

“We found the can of negatives in the bottom of his closets in 2014,” said Dana.

Dana said his father did not get most of the negatives made into prints because at the time, he didn’t have enough money so had the negatives developed and then stored them in the can.

Richard Perkins was a radio operator stationed at Fort Shafter in Honolulu and worked at an underground base inside Diamond Head. Except for a few brief stories, he never talked much about his service to his family, Dana said.

The people in the photos include veterans of the Army, Navy and Marines, as well as USO performers, civilians and children who lived in the area around the Fort Shafter Army base, according to Dana.

“I scanned all the negatives myself,” Dana said. He has a work history in commercial art, graphic design, doing ads and page layouts for print newspapers, magazines, etc.

“So this work is ‘right up my alley,” he said. He said he “painstakingly” scanned the negatives into his computer and converted them into hundreds of never-before-seen historical photos.

“I have no idea how much time I’ve got into this. I’ve been working on it off and on for a few years now.” I am just now beginning the process of adding the information we’ve learned to each photo.”

“There are 672 photos in this collection. I have also included all of the double exposures and bad photos because maybe somebody somewhere might see something in them that I don’t. We have a few other photos in three photo albums that appear to be souvenir photos that Dad did not take himself. I haven’t scanned those yet,” he said.

He said his father used a Kodak Pony camera to take the photos.

Dana said none of the photos show “bombs and bullets” or the aftermath of the attack on Pearl Harbor “which is most likely because Dad was not allowed to take any photos of that or had no access to that part of Oahu at that time. But we can’t say for sure.”

He noted that one photo in the collection (photo 115) shows someone wearing a gas mask and thermal underwear. “The explanation is that soldiers stationed in Hawaii were responsible for defending the entire Pacific area, including the colder climates of Alaska, Washington, Oregon, etc.,” Dana said.

During the past several years Dana and Alice have spent time learning as much as they can about the people and the locations in the photos, according to Dana.

“One of the 8mm movies has a few seconds of billowing smoke rising up, which was later identified as coming from the West Loch Disaster. That event was kept Top Secret for many years (decades),” he said.

Dana said they have received extensive help with the photo project from Milton Migita, a curator at the Army Museum in Hawaii, and from the general public through online social media groups.

The siblings’ goal, according to Dana, is to make all of the photos available to the public by compiling them in a book or through a website. The original negatives, photos, and three photo albums will then be donated to either the Army Museum or the National Park Service in Hawaii, he said.

Dana Perkins said there are still many people in the photos remaining to be identified and it is the hope of Dana and his sister, Alice Smith, that people in North Dakota will recognize their father, grandfather, uncle, mother, grandmother, aunt, or some other friend or relative in the photos.

The photos can be viewed online at: www.WW2PacificVeteransProject.org

Meet the Ward County Teacher of the Year