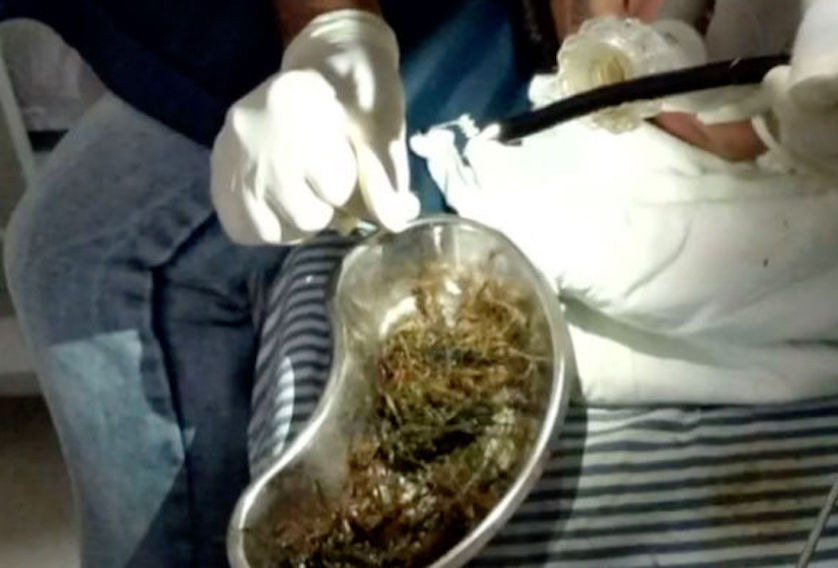 Surgeons said it’s the worst case they have seen to date, removed over 2 lbs from his body!

Per reports, the doctors were stunned when the 16-year-old boy came into the hospital complaining of pains in his midsection. He didn’t know why he was suffering and asked the doctors for help. After discovering the stunning cause of the boy’s, Arjun, pain, the doctors had no choice but to operate. The teen showed up at the hospital complaining of the pain in his stomach. When the professional performed an endoscopy, they discover the unusual cause of his suffering. They had never seen anything like it, and this teen’s body was filled with something very unusual.

According to the doctors, the teenager from India reportedly had more than 2 pounds or 300 grams of wood and plastic inside his body that he had apparently eaten. So much of this stuff had gotten inside the teen. Doctors needed to operate twice to get it all out. And he may not be done with his surgery yet. Arjun faces another operation so doctors can be sure that he no longer has any of these foreign objects inside of his digestive tract. After the truth came out, Arjun admitted to doctors that he was addicted to chewing on plastic and wood pieces.

“Whenever we spotted him eating rubber, we would stop him from doing so, but he wouldn’t mend his ways,” his father, Gurmeet, a farmer, said. “Away from our sight, my son continued ingesting these items. As time passed by he became addicted to this, but never complained of any problem.” Although his family knew that he was chewing on rubbers and wood, they weren’t able to stop the teenager from his odd habit. But Arjun was smarter than them. He knew that his family did not approve of his fixation, so he simply started doing it in private where no one would be able to see him. “We thought the boy has grown up and kicked the habit by himself, but that was not the truth. One and a half years ago, Arjun first complained of stomach pain.

Since then he has been suffering from acute stomach ache. We took him to several doctors, but nobody could diagnose what was the actual problem of the pain.” Although his family seemed to be in on Arjun’s secret addiction to wood and plastics, they did not inform the doctors, Yahoo News reports. So the professionals went on the assumption that the boy had an ulcer. And when he started to lose weight and had trouble breathing, the doctors knew his case was dire and he needed to be healed. “Around a week ago, his condition started deteriorating after he complained of breathlessness and stopped eating altogether,” the father added. “I am thankful to the doctors that saved the life of my son.” Because he ate so much wood and plastic, the materials formed a knot inside his intestines. It became so thick not even water could pass through his body.

Man 'worked hard to get the perfect body', but doctors told him to stop or face certain death!

Mother faces 102 years behind bars after daughter told the judge 'what she did during sleepovers'!

When doctors told this woman why her lip is swollen, ‘she screamed in fear and prayed she won’t die’!

Grandma got troubling call from grandson, rushed down to school and quickly realized what he did to the U.S. flag!

Man with 102 children decided to stop having kids ‘for one stunning reason’!

Woman with baby face and tiny voice cries out in video because people think she is a child due to her short stature, her childlike voice and her baby face

Mother commissioned her new husband to ravish her daughter every few days ‘so she could make one special request in return’!