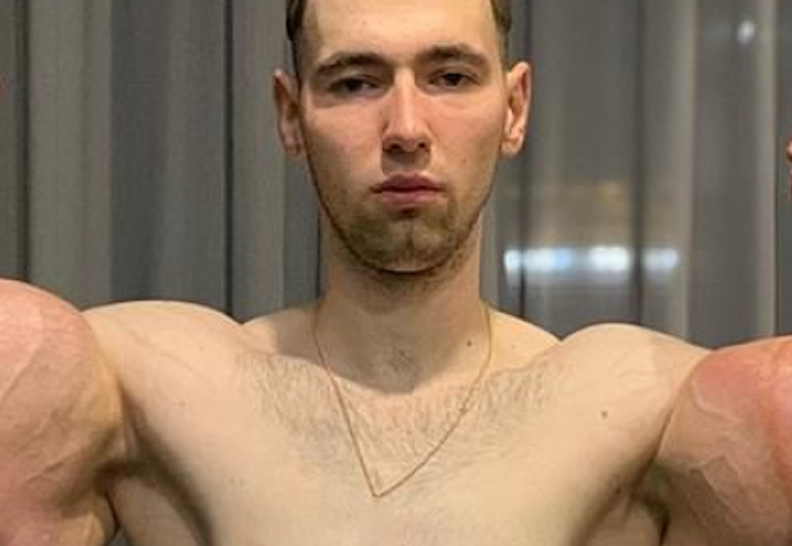 Man ‘worked hard to get the perfect body’, but doctors told him to stop or face certain death!

The 25-year-old man, Kiril, told the doctors that he wanted to look like Superman. The bodybuilder was willing to do whatever it took to make his arms appear as big as possible. As a former soldier, the 25-year-old man knows that it often takes great effort to do great things. However, he took things way too far when he decided to inject himself with harmful chemicals to make himself appear stronger and more muscular. If he doesn’t reverse the treatment as soon as possible, he could lose his arms, or even his life.

Despite warnings from health experts, the 25-year-old man decided to inject six liters of Synthol into his arms to make them bigger and buffer. Now, health experts have an even more dire warning for the athlete. They told him that he has to remove the hardened lumps of petroleum jelly from his body or else face certain “death” from its mistreatment. The 25-year-old man from Russia reportedly injected six liters of Synthol, a form of petroleum jelly, into his biceps so he could have arms like Superman’s (SEE PHOTO). But the former soldier failed to realize the devastating consequences of his actions and now has to deal with the fallout from the foolish procedure. According to a Daily Mail report, the hardened petroleum jelly has penetrated skin tissue and infiltrated his muscles. The bodybuilder suffered from blocked blood flow and experienced a fever and lots of pain.

Surgeon Melnikov warned him as directly as possible: “The risk of complications, in this case, is very high. But inaction will not help the patient. A toxic substance in the body long term can complicate the kidneys and lead to death.” Obtaining the “perfect” body requires a lot of hard work and sacrifice. However, it is not worth risking your life to do so. People like Kiril are nothing more than naïve fools who end up causing themselves more harm than good in their quest for beauty or strength.

Fortunately, he underwent surgery with Dr. Melnikov had had the hardened lumps removed. He will still be able to move his arms after the life-saving surgery but has lost the sizeable muscles forever. He has amassed a following of fans in his home country and is popularly known by his nickname Bazooka. “Soon, I will have a very complicated, hard third surgery,” he said in a video ahead of surgery.  He added, “I bulked up my arms when I was 20 due to my own stupidity. I did not think about the consequences.”

Woman woke up from coma after 3 weeks, left stunned 'when she learned what her family did'!

Surgeons said it's the worst case they have seen to date, removed over 2 lbs from his body!

Pastor pressured to resign over ‘controversial sign’ that offended locals!

3 years after starving her baby, mom arrested again after police made a ‘gruesome discovery in her car’!

Mother dragged 11-year-old daughter on beach, undressed her and shoved sand into her mouth; then she grabbed a piece of driftwood!

Just moments before doctors take 3-year-old child off life support, they notice something