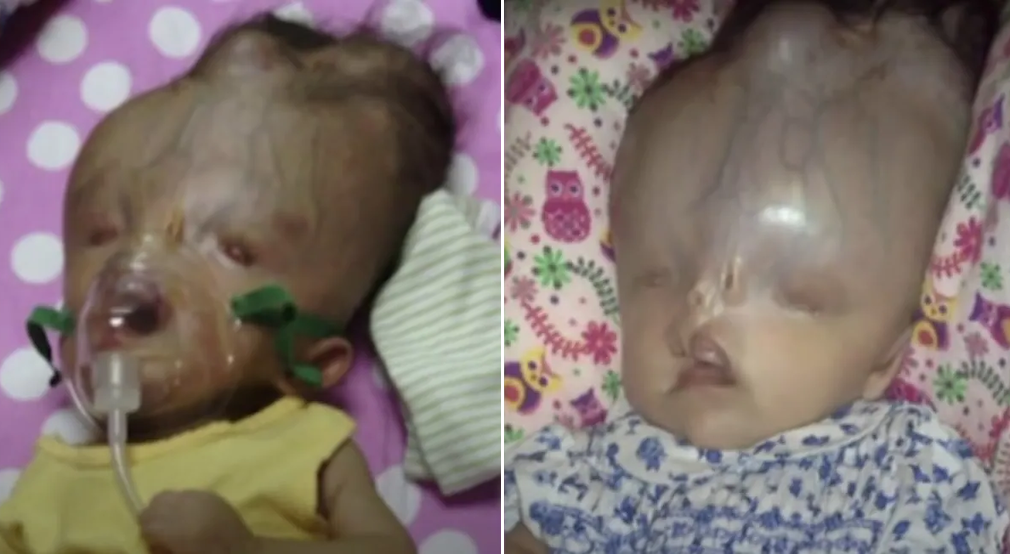 The young mom was advised by the medical personnel to terminate her pregnancy after a scan showed that the child was incompatible with life. However, the brave mother decided to give her a chance to live. She revealed that her daughter was born with a crown embedded in her head because of her unusual bone protrusions. the baby’s eyes, brain, and nose failed to develop properly, and the scans showed that she had a cleft lip, clubbed foot and fused fingers.

The mother, Lugo, her daughter, Helianny, recalled the time she was made aware of her daughter’s, her daughter deformities: “From the beginning doctors diagnosed the non-compatibility of Helianny with life. They always recommended termination of the pregnancy. Even though we were told she was a vegetable, I assured them she was not because she kicked me. She responded to stimuli, when I talked to her she responded with kicks and she liked instrumental music, she moved a lot with all of this. I decided to give her a chance to live. I loved her with my soul and with all my heart.”

She added: “She had a cleft lip, her eyes were not formed, her nose was not visible, her brain was not completely formed, with a clubbed foot and hands without fingers.” She also had hydrocephalus, a condition that causes fluid to fill the brain cavity, leading to a swollen skull and potential brain damage.

Lugo stated: “I would compare Helianny’s appearance back then to a ‘supernatural queen’ because she had a crown embedded in her head. The three protrusions on her head looked like a crown, she had no eyebrows, no eyelashes, very pronounced veins on her head that seemed to burst and pink skin color in her eyes, where her eyeballs should be. Her nose was completely stuck to the skin with only two nasal holes, one very small and the other slightly larger. But even so I perceived her beauty then and still do to this day. I consider my little girl a true warrior of life, a fighter. A winner in all of the battles that she has had to fight. I believe Helianny came to this world to teach us not to give up, to stop complaining about nonsense, to live one day at a time, to be grateful with what we have.”

To this day, Helianny has had four surgeries: The first two were to drain fluid from her brain, the third was to relieve her club foot, and the fourth to help with her cleft lip. Lugo stated: “In the future I hope we can achieve the funds to perform the necessary surgeries. I dream of seeing Helianny walk, talk and be as independent as possible so her only limitation is what she limits herself to. I thank God every day of my life, Helianny has life, strength, tenderness, perseverance, optimism and she is an angel. Helianny came to this world on a great mission of life, to show us that we complain about so many insignificant things and forget to be happy.” The mother shares regular updates about her daughter on her social media account. And yes, this is the latest photo of the child.

Woman discovered that she's the only passenger on the flight, then the pilots did this!