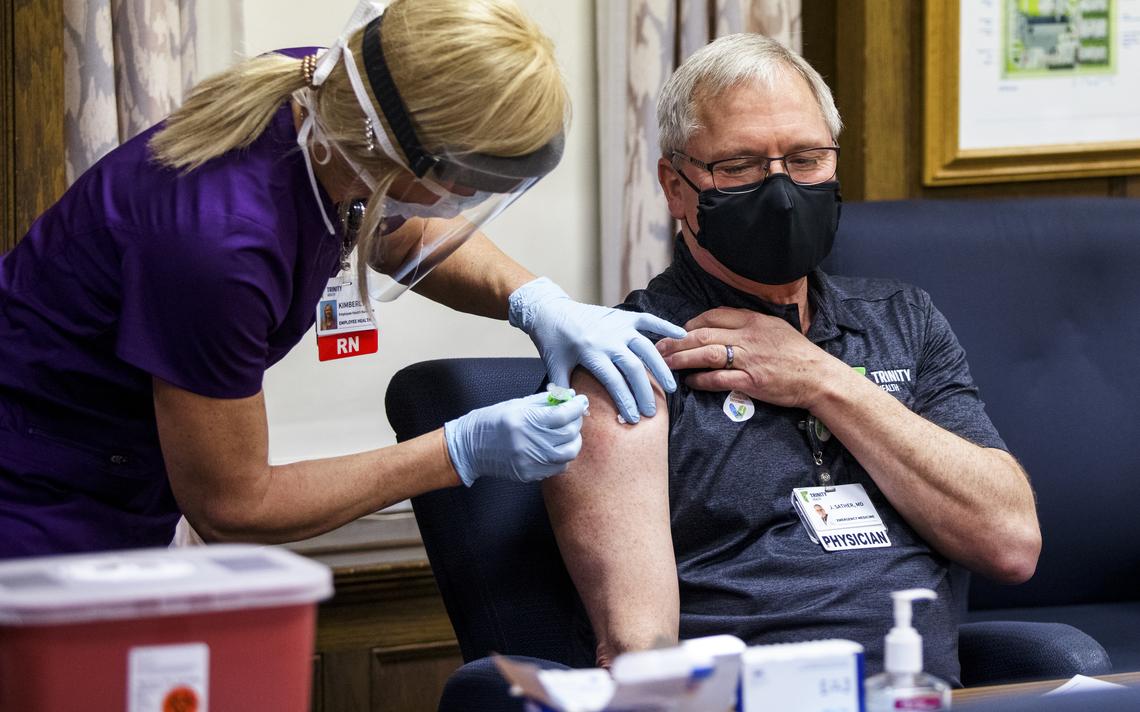 MINOT, N.D. — Dr. Jeffrey Sather preached vigilance minutes after he received his dose of Pfizer’s COVID-19 vaccine, one of the first administered in Minot.

“I’m proud of this,” said the doctor, chief of staff at Minot’s Trinity Health, holding up his vaccination card as he posed for photos. Trinity received a small batch of 250 doses on Thursday morning, Dec. 18, and began vaccinating priority staff early Friday.

But for Sather, the long winter ahead looms larger than the wonder in these first vials of vaccine. “I feel a sense of relief, but the relief isn’t today,” he said.

The vaccine’s arrival in Minot followed just on the heels of an all-fronts crisis at Trinity Health. The hospital converted a whole floor and a half into a COVID-19 unit. For weeks in October and November, Sather’s hospital was on diversion more than off, often too full to accept transfers from rural hospitals in the surrounding area. Sather and his colleagues reported patients piling up in cars and in the waiting room. At one point, close to 140 staff members were out on quarantine. And at a press conference last month, Sather flatly described having “to watch someone suffocate to death” daily, “sometimes multiple times a day.”

As in other parts of the state, virus cases have fallen sharply in Minot in recent weeks. But the city’s surrounding Ward County holds the unenviable spot as the deadliest county in North Dakota’s pandemic. At 165, Ward has reported more COVID-19 deaths than any other county, surpassing the larger population centers of Burleigh and Cass.

“We were hit in a devastating way because we got hit hard in a very short period of time,” Sather explained. “We saw almost nothing for the first many months of the COVID pandemic. We saw just a few patients trickle in. We went a few months early on without a single hospitalization.”

Dr. Jeffrey Verhey, a pulmonology and critical care specialist, said that while the overall burden on Trinity’s COVID wing has gotten lighter in the last few weeks, a lag in recoveries has actually created an increased burden on the hospital’s intensive care unit in the last week and a half. Some of the most serious virus patients are still suffering. “On a ventilator, it takes weeks and weeks to get better and for them to come off the ventilator,” Verhey said. “It’s what I call ‘COVID hell.'”

So even with the sudden reversal in fortunes that the vaccine brings, it’s hard for Sather and others in Minot to look at its arrival as anything more than one important step forward. Not yet.

“We are not over the hump,” Sather said. “Because what will happen if we don’t do what we’re doing here today with everybody, is people will start to let their guard down.”

Sather, who was one of the state’s most outspoken advocates for mask mandates this fall, said he has seen a “palpable difference” in Minot since North Dakota adopted a statewide mandate in mid-November. But he also noted that he and his wife do little more than go between the hospital, grocery store and their home and urged that others not break form with months still to go before the vaccine can be effectively distributed across the state.

The doctor stressed that he hopes as many North Dakotans will take the vaccine as have abided the mask mandate in recent weeks. “If we don’t have people vaccinated, we’ll see a resurgence of COVID-19 in 2021,” he said.

Jennifer Weichmann, Ward County’s emergency management director, described herself as “skeptically optimistic.” For more than a month, she stood at the ready to request a refrigerated morgue truck, as her city’s two funeral homes approached their limit for caskets and funerals. “We’re all just kind of waiting on bated breath to see what Christmas brings and New Year’s, especially after people maybe are a little more comfortable with being complacent,” she said.

Still, the vaccine brings a comfort that Weichmann hasn’t had before. She and her boyfriend are both first responders, and her boyfriend, a firefighter, already fought off a case of the virus. “Knowing that both of us are down the list for that vaccine definitely helps me sleep a little better at night,” she said.

At Somerset Court, a Minot assisted living facility that was devastated by the virus this fall, the mood was lighter on Friday. In October, an outbreak burned through the facility with alarming speed, spiking the home from zero COVID-19 cases to 58 in a single testing day. Twenty-one people died.

But Friday marked the start of a new chapter. At a folding table beneath a Christmas tree, staff members signed residents up for a shipment of vaccines, expected later this month.

Gudron Sjol, a 101-year-old who was among the 58 residents who tested positive for the virus in early October, said she first learned about the vaccine on TV a few weeks ago. She said she plans to take it, and sat down at the table to get herself registered. “I didn’t have to think about it,” she laughed.

But it’s been a long few months in Somerset. Memory of the trauma there is so recent that staff were waiting this afternoon for notice from the local pharmacy as to whether a large group of residents who tested positive within the last 90 days would be eligible for the first round of vaccines. A lot of residents were skeptical of the quickly-developed vaccine at first. And while Somerset was finally holding at zero positive cases in a recent stretch, they reported two new positives again this morning.

There’s still a lot of work to be done, said Melissa VanDeventer, Somerset’s director. “It’s baby steps back to what we — you know, what’s the word I’m looking for? The ‘new normal.'”

Officials work to get people vaccinated for COVID-19 as demand slows, but skepticism remains