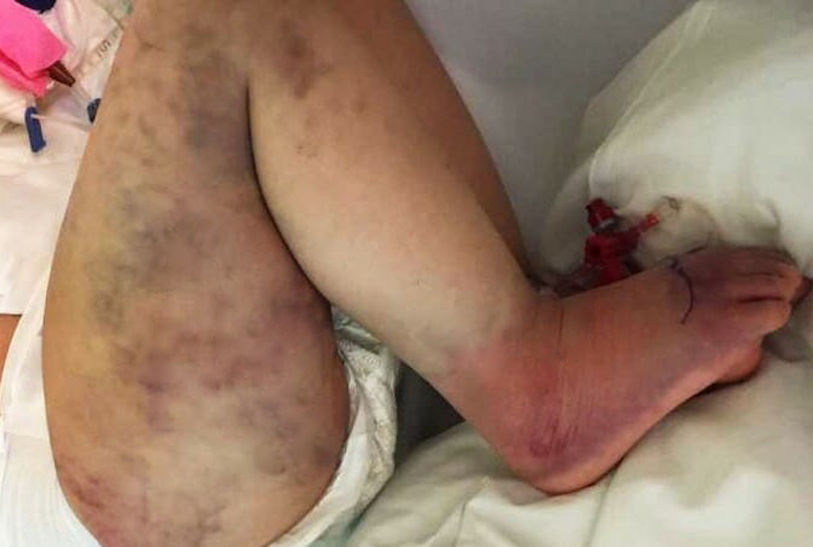 Mother thought her toddler was stung by a wasp, ‘until she took a closer look’ and desperately called for help!

All parents know that little children love to play outside. From picnics to games, kids simply love to be outside, where they can run and play without a care in the world. Unfortunately, sometimes, there can be danger lurking in your own backyard, and although we want our kids to have the freedom to be carefree, we must know the threats they could stumble across. After her 3-year-old son, Christopher, played outside, the mother, Elizabeth, thought her boy was stung by a wasp. Unfortunately, that was far from the truth. When the brave mom looked closer, she noticed that the boy’s body was turning blue and immediatelly called for help.

As the 3-year-old boy came running to his mom, she didn’t thought it would be anything too serious initially. She never imagined that she was about to face one of the most dramatic events that she had ever experienced. She and her boys were visiting family, recalling the day her life was turned upside down. “Then, he began to cry a little and climbed onto my lap. We thought he had been stung by a wasp or scratched himself on a branch,” she explained. He had stepped on something alright, and it was wildlife too — but it was far worse than a wasp. She’d soon realize he hadn’t been stung, but rather, bitten.

Just 10 minutes after the crying boy crawled onto his mother’s lap, his foot began to swell and turn blue. That’s when the mother called 911. “The ambulance and helicopter arrived quickly. They kept saying it was a viper snake bite, and we were transported to a hospital,” the mom said. The boy was promptly given antivenom and initially began to show signs of improvement, but then, he suddenly took a turn for the worst. He had begun to bleed internally from his intestines, and what started as some bruising on his foot and ankle was about to spread to the rest of his body as practically all of him turned blue and appeared bruised.

When doctors measured the boy’s blood volume, it was less than half of what it should have been, and he had quickly lost weight, going from 44 pounds down to 33. He was in a fight for his life, all because of a simple mistake. It took nearly two weeks of being hospitalized, but thankfully, the boy was eventually well enough to go home. He survived, but his battle was extremely difficult, his mom said.

Man indecently abused another victim while on probation, but 'the judge said he shouldn’t go to prison' because of this!

Man tried to 'indecently assault' woman, but she bit off a piece of him he’ll never be able to get back!

Surgeons were left stunned and knew the cause of death immediately ‘when they pulled this out of man’s body’!

Mom faced criticism ‘after she revealed the reason why she tattooed her ex-boyfriend’ on her face!

Father says ‘this is how he knew his son was trans’ at age 2!