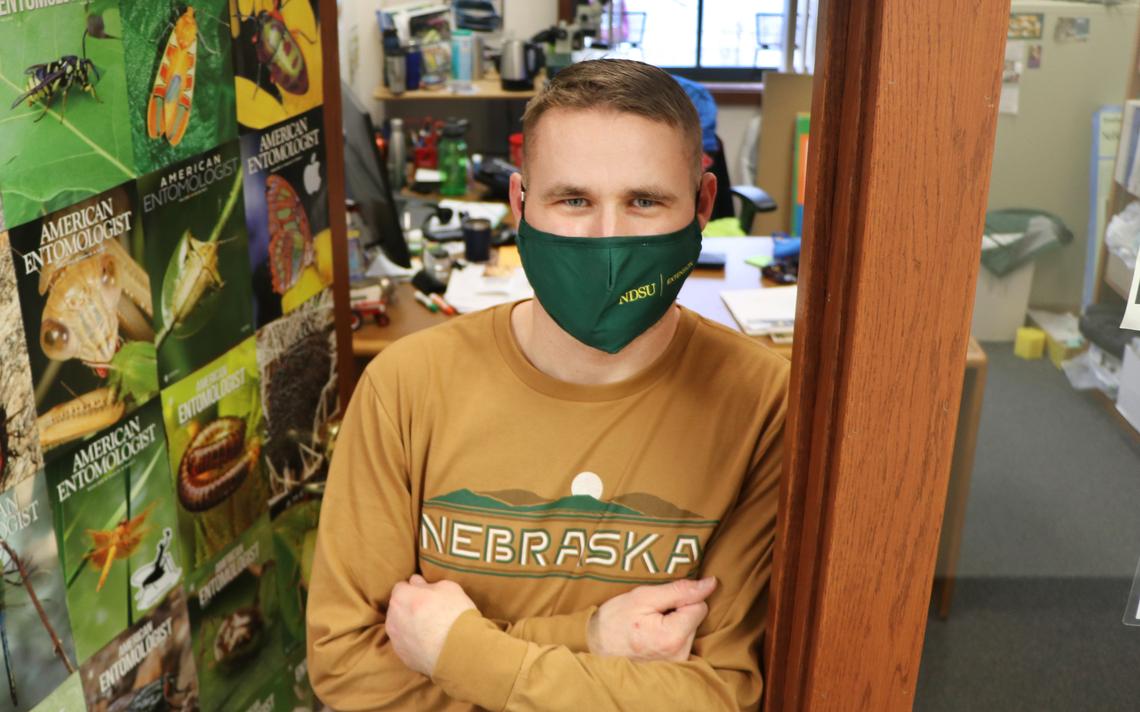 Prochaska does a lot of work with entomology as well as some plant pathology, or disease work.

Prochaska, 33, grew up on a soybean and corn farm near Seward, Neb., just outside of Lincoln, Neb. He graduated high school in 2005 and studied at Concordia University in Seward — a degree in biology, minors in chemistry and business.

While a high school sophomore, he was to start an internship with a U.S. Department of Agriculture in a laboratory at the University of Nebraska at Lincoln.

Just before he was to start, the sponsor changed the age requirements and suddenly Prochaska was six months too young. With that path blocked, an entomologist in the department asked him to go to work for her

“She originally said, ‘Why don’t you come to work with me this summer, and you can go back to the USDA next year. However, she never let me go back and she became my master’s and PhD advisor in time.”

For about six months, Prochaska returned to the farm and helped with harvest with his parents, Ron and Julie, and a younger sister, Traci, who is working on the farm.

“I wanted to be in ag,” Prochaska said of his career aims. “I just didn’t know if sitting behind a tractor each day in the summers was something I wanted to do.”

He applied for university positions and was hired at Minot. He arrived in April 2016 and since has focused primarily on northwest counties but is willing to travel across the state.

One of the biggest issues for growers in this area has been canola flea beetle control.

“They’ve been using seed treatments on a lot of canola, but it’s beginning to show that there are some areas where it’s not working anymore,” he said. Prochaska has studied the issue in both university and industry-sponsored studies.

On the plant pathology side of things, he worked on wheat curl mite research, to encounter a problem in his first couple of years at the station. The mites are a vector, or carrier for wheat streak mosaic virus, a perennial problem for wheat.

“Reinforcing some of the steps you can take with cultural control of the mites and reduce the transmission,” he said.

Prochaska said working in northwest North Dakota has been a growth curve because he grew up in largely a corn-soybean rotation. North Dakota has 40 important crops grown across the state. He’s learned a lot about canola and even wheats.

“Wheat seems so basic, so widespread in North Dakota, but it’s something in eastern Nebraska that just doesn’t exist,” he said.

The variety of crops makes the agricultural economy stronger for two entwined reasons.

First, having different varieties of crops expands the rotation in a way that prevents year-after-year cropping. It reduces the rise of harmful insect or disease pests.

In addition there are niches within crops for organic or other markets. Prochaska said he answers questions for organic farmers, but not as many as he’d expected. That might increase in the future, as the organic market continues to rise. He also has worked to expand programs to familiarize farmers and others of crop-friendly insects.

He said young people considering a career in extension should reach out to regional research centers where they live and perhaps try for an internship. The Minot center has programs in pulse crops, entomology and weed science, for example. He advises getting experience in public speaking — “even if it’s five people.” Friends and colleagues will want you to succeed and will give you feedback, he said.

Port: On oil and gas issues, Biden’s administration is only interested in listening to some American Indians

A woman has died after a semi hit her