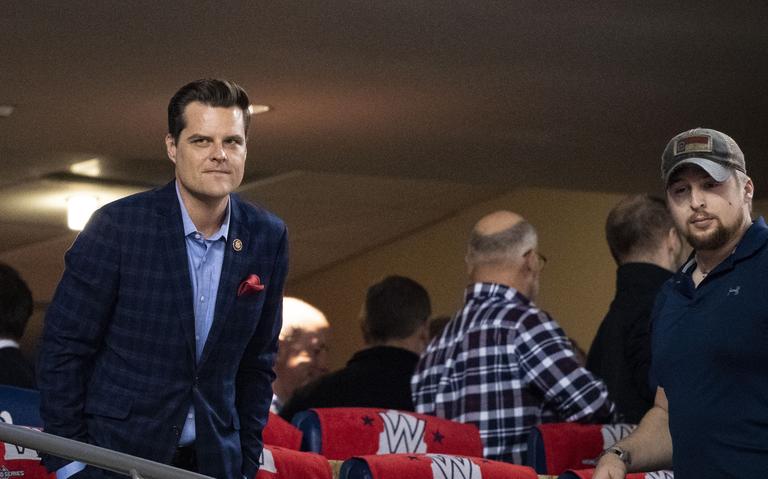 N.D. – The most profound political moment in the Gaetz family’s history unfolded the day of the 1964 North Dakota Republican convention, when Jerry Gaetz — candidate for lieutenant governor — gave a speech, walked into the crowd, and promptly collapsed and died.

Don Gaetz, age 16 at the time, watched it unfold. He had begged to be there in person, but his father forbade him, telling him to go to school instead. So Don cut class to catch it on TV.

“I had the unique and rather alarming experience of watching him first make a speech to the convention, urging them to endorse Barry Goldwater for president — my dad was chairman of the North Dakotans for Goldwater,” Gaetz recalled in a phone interview. “And after the speech was over, he came down to the floor and was shaking hands with people … and I saw him drop over and die of a heart attack.”

Don Gaetz went on to become the Florida Senate president; he told the Associated Press in 2013 that his political career was his attempt to “finish my father’s work.” Don’s son, Matt, is now a GOP congressman serving the tip of the Florida panhandle. Only Don knew Jerry, of course, but both he and Matt remember the Gaetz patriarch warmly.

“He always ran against the tide in politics, and other ways as well,” Don said. “His campaign slogan was unbought —unbought — let’s see, what was it …”

Rep. Gaetz, who shared a phone interview with his father, cut in without hesitation:

That slogan appears to have kept its meaning for the Gaetz men over the years. It adorned a campaign poster of Jerry’s that hung in Don’s Senate office, advertising Jerry as candidate for lieutenant governor, a state senator and — for his erstwhile work in Rugby — “America’s most progressive mayor.”

Matt Gaetz said he has own campaign poster of Jerry’s in his congressional office.

That spirit runs in the family, and Matt Gaetz is probably the current moment’s most famous example. Gaetz has been an outspoken, bare-knuckled defender of President Donald Trump, so much so that it has become much of his political identity.

He even remarked to Buzzfeed News earlier this year that he doesn’t know “how I’d fit into (Washington) in the absence of the president.”

The list of punches he’s thrown on Trump’s behalf is long. He called special counsel Robert Mueller’s investigator’s “biased”; he loudly protested his ejection from a closed-door impeachment inquiry hearing; on Twitter, he taunted Michael Cohen, the president’s former personal lawyer, as Cohen prepared to testify before Congress.

“Do your wife & father-in-law know about your girlfriends?” he said in the tweet, for which he later apologized. “Maybe tonight would be a good time for that chat. I wonder if she’ll remain faithful when you’re in prison. She’s about to learn a lot.”

In the joint phone call with his father, Rep. Gaetz described himself as a “close friend of the president.”

“I value our friendship. We speak often,” Rep. Gaetz said. “One thing I admire about the president is he doesn’t like bullies, and we don’t either.”

This quickly led to both Matt and Don Gaetz reminiscing on an old story about Jerry. Don said that, as a district “roadmaster” for the Great Northern Railroad, Jerry once felled a man with one punch in an argument over allowing Native American labor to move their families to Rugby.

“And that settled the question of whether the Indians were going to live in Rugby,” Don said. “And they did.”

Rep. Matt Gaetz’s fighting style has earned him both pushback from his adversaries and at least one big headache. For his tweet at Michael Cohen, Rep. Gaetz earned an investigation from the Florida Bar (though it eventually cleared him of wrongdoing). He also earned widespread criticism for leading GOP lawmakers — some carrying cell phones — into the highly secure area where closed-door impeachment inquiries were taking place.

For that latter item, Gaetz had no apology.

“I’m proud of the work that I did to highlight the terrible unfairness of this impeachment process conducted in the bunker of the Capitol building,” he said. “… Certainly there are times when my fighting style has left me over my skis in the course of a decade. And if I’ve learned anything from that, it’s that you pick yourself right back up and dust yourself off and try to do better next time.”

It’s hard to find contemporaries for Jerry Gaetz because 1964 has begun to fade into distant memory.

Mark Andrews, the senior-most surviving GOP figure from the era, couldn’t be reached for comment. Lynn Aas, who served in the Legislature in the 1960s, does not recall Gaetz. But if Gaetz had survived and found his way onto the ticket, it’s hard to imagine him winning the election.

Mike Jacobs, former publisher of the Grand Forks Herald, recalls the 1964 election as a mid-century “high water mark” for the Democratic-NPL.

President John F. Kennedy’s assassination was lingering in the national mood, and Lyndon Johnson barnstormed most of the country, carrying more than 61% of the popular vote and 486 electoral college votes. It’s the last time a Democratic presidential candidate won North Dakota.

The 1960s are also when the Democratic-NPL power structure, which lasted into the 1990s, was well and truly established. In 1964, Democrats swept through Bismarck, too. And Charles Tighe, the Democratic candidate for lieutenant governor — elected separately from the governor, in those days — defeated the GOP’s Frank A. Wenstrom with about 52% of the vote.

To some, this came as a surprise. Lloyd Omdahl was Democratic-NPL tax commissioner in the 1960s and he recalls the state party’s campaign apparatus running so low on money that he said it was tough to scrape together the postage to ask local, precinct-level officials to send their financial resources along.

“I don’t know if anybody expected to win anything, and here comes this avalanche in the Johnson landslide,” he said.

Despite Jerry Gaetz’s tragic end and the North Dakota GOP’s 1960 failures, Matt Gaetz said one of the biggest inheritances from his grandfather has been his campaigning style.

“We believe in prairie populism, and campaigning up close with people — you know, front porch to front porch, handshake to handshake,” Gaetz said. “To ask someone for their vote is a deeply intimate ask. It’s asking someone to put their trust in you. That’s something that I think runs in my family’s tradition back to the prairies of the Midwest.“

Stranded in his car for 3 days in 50 below zero weather, a 16-year-old North Dakotan faced multiple amputations. Where is Bennett Stebleton now?