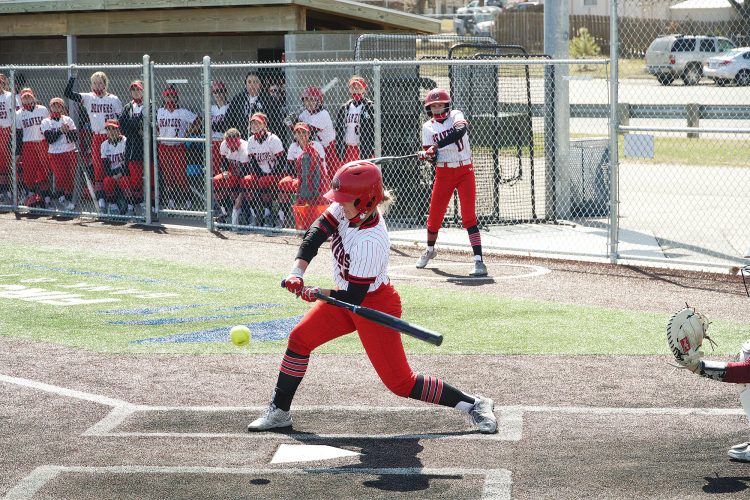 MINOT, N.D. – The Minot State Beavers softball squad wrapped up a lengthy 10-game homestand Wednesday afternoon with a doubleheader against the Northern State Wolves. The Beavers rode early offensive success to a 6-3 win in the opener, but fell flat in a 1-0 nightcap defeat.

Minot State’s homestand began 11 days ago when the Beavers were swept in an April 10 doubleheader by the University of Minnesota Duluth. Minot State was able to muster only one run in the two games, and later dropped both ends of a doubleheader to Augustana April 17 to open the homestand 0-4.

A visit from Wayne State College the next day was just what the doctor ordered. The Beavers’ offense righted itself, outscoring the Wildcats 21-4 in the two contests to sweep the twin-bill in style on Senior Day. Minot State was looking for an equally strong showing Wednesday before embarking on their next four-game road trip.

While the Beavers would eventually take the opener, it was the Wolves who started the day strong at the dish. Northern State jumped all over Minot State starter Trinity Valentine in the top of the first inning, scoring two runs on three hits with the help of a Beavers error. Valentine, appearing in her 21st game of the season, faced seven Wolves hitters before she was finally able to escape the top of the initial frame.

The Beavers were primed to get both runs right back in the bottom of the frame after Jazmin Karunungan and Jamie Odlum reached with a single and walk, respectively, to lead off the inning. Julia Suchan fanned against Meghan Anderson, though, and Isis Cabral hit into a double play to end the threat.

Northern State chased Valentine from the game the next inning, beginning the frame the same way Minot State did an inning prior. After one-plus innings of work, Roxanne Ines was summoned by Beavers head coach Nat Wagner. Ines calmed things down for Minot State in the circle, setting down three of the next four she faced to retire the side with no further damage done.

An inning removed from misfiring with a pair of runners on base, the Beavers’ offense started to click in the second frame. Gabi Dawyduk and Maggie Mercer hit consecutive singles to greet Anderson in the inning, halving the Wolves’ lead with the help of an umpire-reviewed Dawyduk stolen base. Jaycie Rostad led off the third with a triple to right-center field, and thanks to an Odlum RBI groundout, the game was all knotted up at two heading into the fourth inning.

Anderson and Ines both threw clean fourths, but the Beavers’ offense broke the game open in the fifth and sixth innings.

Rostad drew a leadoff walk from Anderson, and after Karunungan grounded out to third baseman Kennady Thompson, Odlum again came through. She lined her first triple of the season to right-center field, plating her catcher and giving the Beavers their first lead of the game, 3-2.

Suchan immediately followed with a run-scoring single to tack on one more before Odlum drove in her third and fourth runs of the day in the sixth inning on her second knock of the game. Her four RBI tied a career-high set on April 14, 2019 as part of a 2-for-4 day at the plate against Wayne State.

Armed with a 6-2 lead, Ines trotted back out for the seventh inning. Northern State was able to squeeze one more run out of the Beavers reliever, thanks to an error by Karunungan in center field, but the lefty limited the damage to a single run and sealed the 6-3 victory, Minot State’s 15th of the year, with a pair of flyouts.

Minot State’s offense ran out of gas in the nightcap, though, as it was able to muster only four hits, two of which came off the bat of Isis Cabral, in a 1-0 defeat.

Dawyduk needed just 72 pitches to toss seven strong innings, allowing the single tally in the top of the sixth inning on an RBI single to Chanel Siebenthal after Makenzie Merritt lined a two-out double to left field.

Elyse Cuttic out-dueled Dawyduk on the other side, firing seven clean innings allowing only the four hits and one walk while striking out three.

The Beavers will look to regain their offensive groove on the road against Southwest Minnesota State Saturday afternoon, as first pitch of game one of a doubleheader in Marshall, Minnesota is scheduled for 12 p.m.

Teachers staying away from classroom after COVID-ravaged school year

Proposed buffalo-themed amusement park in Jamestown could get state backing