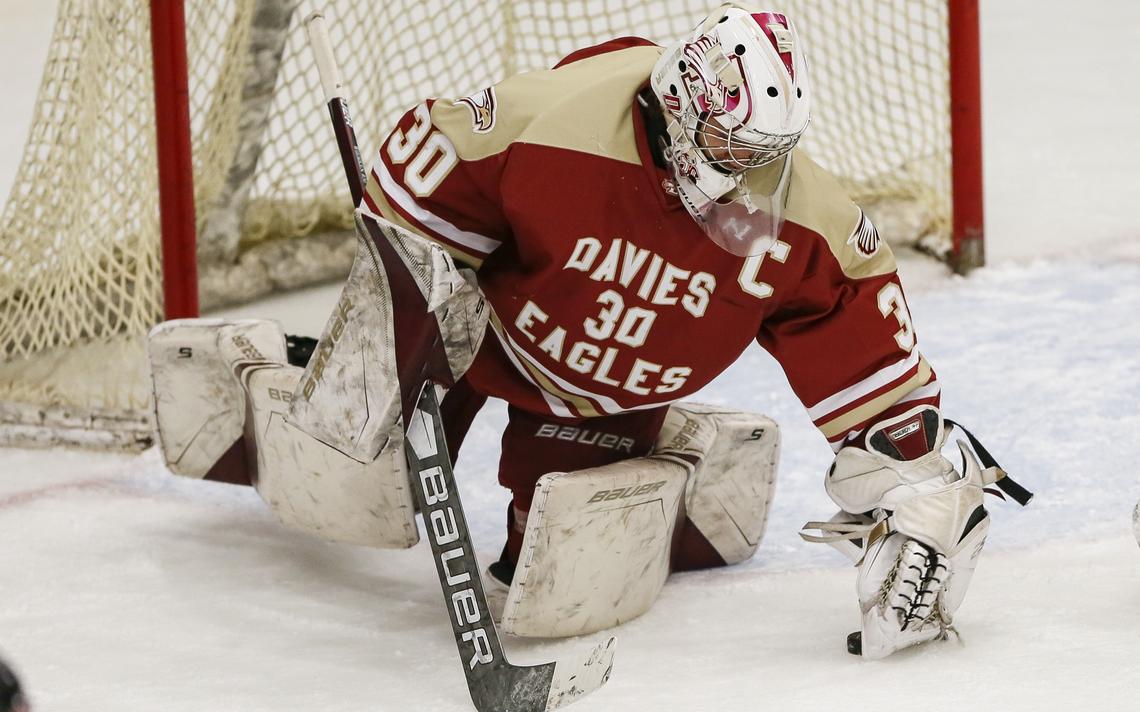 N.D. – It had been more than a decade since Moorhead tasted defeat at the hands of a North Dakota team.

That changed Thursday, when Fargo Davies churned out a 3-2 win over the Spuds at Moorhead Sports Center. It was the first time the cross-state opponents had ever played each other, and it turns out, the first time was the charm for Davies.

Moorhead hadn’t lost to a North Dakota opponent since Jan. 5, 2010, when Fargo South-Shanley beat the Spuds 4-2 in Moorhead.

“The kids have been battling Moorhead all the way through their youth, and we finally get a chance to play them in high school,” Davies head coach Nate Metcalf said. “They’re pretty pumped up. We tried to keep them level-headed in the locker room, but we want to be playing our best hockey at the end of the year, and it seems like we’re taking good strides and hopefully we continue to do that.”

Moorhead’s Harper Bentz attempts to get the puck in for a goal against Fargo Davies’ goalie Trent Wiemken while Davies’ Skylar Seckerson (23) and Gunnar Barwicki (25) help block the puck during their hockey game on Thursday, Jan. 28 at the Moorhead Sports Center. Alyssa Goelzer / The Forum

It was an even matchup, and neither team wanted to lose. Ultimately, Davies (9-5) walked away with the Red River bragging rights. Metcalf said the notable victory “felt good for the boys.”

“We knew they like to get up and down the ice and play physical and that’s kind of how we liked to play, too,” Metcalf said. “We figured it would be a good matchup, and it turned out to be one heck of a game.”

Moorhead’s speed and shiftiness generated some scoring chances early in the first period, but Davies goalie Trent Wiemken stopped everything. The junior goaltender was calm and composed throughout the 38-save performance.

The Spuds (1-3) had been pesky on the forecheck all period, and that persistence finally paid off. Sophomore center Ian Ness broke the scoreless deadlock with less than a minute to go in the first period. He collected his own rebound and buried the puck with a backhand to get the Spuds on the board first and record his first varsity goal.