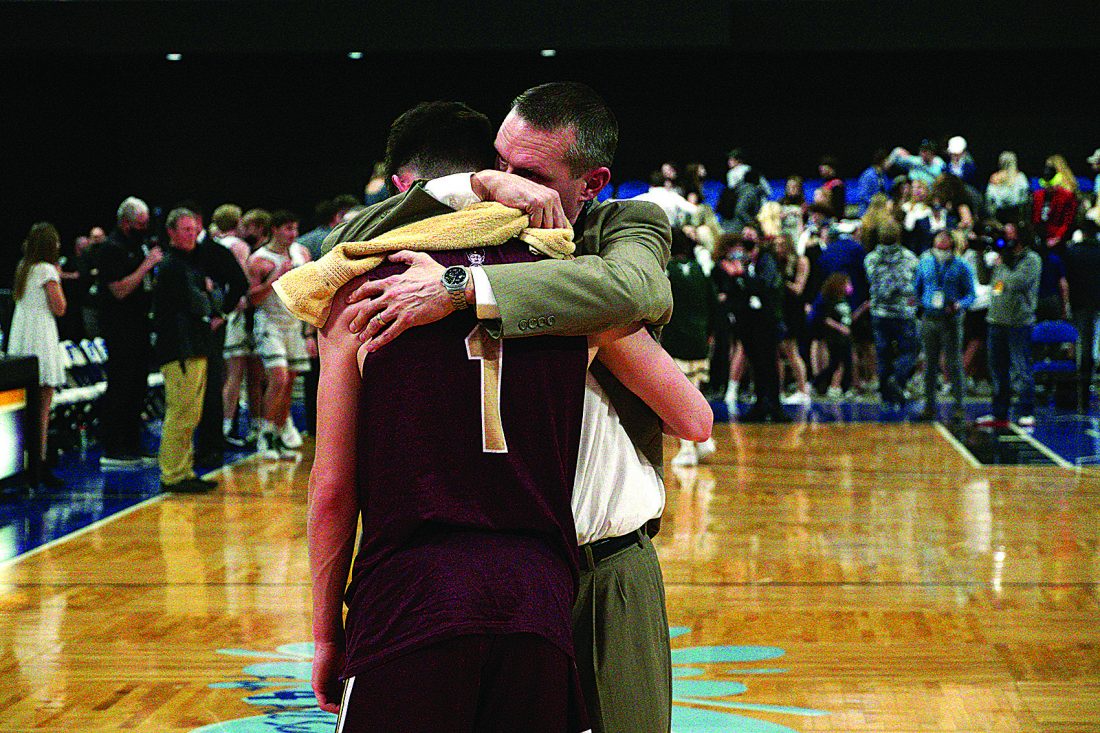 The Magicians boys basketball squad advanced to the Class A state championship game for the 29th time in its program history by virtue of its 71-68 comeback victory over the Fargo Davies Eagles Saturday night, its 23rd win in 24 games this season.

The last team standing between the Magi and their nineteenth state championship was Carter Birrenkott and the 21-4 West Fargo Packers. Birrenkott, averaging 23.3 points per game this season, led a West Fargo offense that had scored at least 90 points on nine different occasions, and topped 100 twice.

This was not the first time the two programs met in the state championship game. Minot entered its Sunday contest 1-1 in its title-game history against the Packers, having won 65-59 in overtime in 2016. The Packers prevailed against the Magicians in 1992 by a 65-50 final tally.

Minot’s counterattack for Birrenkott was led by senior guard Deonte’ Martinez, coming off a 28-point performance in the state semifinal matchup and having scored 101 total points since the March 2 west region quarterfinal.

The Packers showcased their high-octane offense from the start, when Brett Limke drained a three-point shot 29 seconds in to kick off the afternoon’s scoring. Carson Hegerle forced a turnover and took it all the way back for a layup 22 seconds later, and Minot found itself in an early 5-0 hole.

The Magi found an answer as the second minute of play ticked off the clock, when RaShawn Wilcox was fouled on a shot attempt and made his two tries from the line. Darik Dissette then stole the ball away from a Packers defender in the offensive zone and put it back up off the glass for two more to trim West Fargo’s lead to one.

After the Packers rattled off a 9-2 run, Minot was able to find its offensive footing somewhat, benefitting from two Dissette free throws and a two-point jumper from Martinez, but West Fargo’s defense was stifling for much of the first half.

Minot was able to put together a bit more sustained offensive success inside of the seven-minute mark, when Martinez, Wilcox and Kade Butz, combined for 11 points on five field goals and a free throw. Dissette capped off the first half with two more makes from the charity stripe, but the Packers’ offense was overwhelming and boosted West Fargo to a 40-25 halftime lead.

Whatever was said during Winczewski’s halftime meeting, it worked. To perfection. To say Minot exploded out of the break would be an understatement. Martinez made a two-point field goal. Dissette added two more from the line. Michael Ross banked one in off the glass. Eric Wentz scored two more. Wilcox put another layup in. Before West Fargo had a chance to blink, Minot had cut the lead to five.

The Packers finally responded with another two-point field goal with 14 minutes and 37 seconds left, but the Magi were relentless. Once the clock ticked down to 11 minutes and 14 seconds, Minot was down 44-43, having outscored its opposition 18-4 since the break.

West Fargo started to adjust to Minot’s haftime tweaks, producing a 10-4 run as the clock ran down under the eight-minute mark. As was the case the previous night, Martinez was at the center of the Magi’s comeback attempt, and Minot kept fighting to stay with the Packers. Martinez drained two more tries from the line and made another two-point field goal to again bring the Magi to within three.

They completed the comeback when Ross pulled up from the middle of the offensive zone beyond the arc. He let his shot fly and drilled a game-tying triple. Wilcox scored two more to give Minot its first lead of the contest. The student section behind the basket erupted.

West Fargo answered right back, and the Magi hung with the Packers until the final seconds, but the eastern representative snagged five quick points in the final seconds with the game tied at 60, and the clock ran out on Minot’s magical season with a 65-60 final score.

Despite the falling short of their goal, Winczewski stressed how proud he was of his players and what they were able to do throughout this season.

“It hurts, but it isn’t going to change what this team accomplished,” he said. “You’re picked sixth, no one thinks you have a chance to do anything, and to end up 23-2? It hurts now, but I’m so extremely proud of these kids, I love every one of them and I wouldn’t change one bit of it.

“Sometimes, no matter what you do, you just end up short,” Winczewski continued. “You throw your heart out there, you battle as best you can. Unfortunately, sometimes you get hurt. But you can’t change any of that. You can’t change your effort, you can’t change how hard you played, and the fact you played for each other.”

The word ‘closer’ was being thrown around by various media members down the stretch of, and in the minutes after, the Minot High School Magicians’ state semifinal contest against the Fargo Davies Eagles Saturday night.

They were referring to 5’8″ senior Deonte’ Martinez, who scored 16 of his 28 total points in the last seven minutes of play, including going 6-for-6 from the foul line, to lead the Magi to a 71-68 come-from-behind victory in their Saturday night state semifinal contest against the Fargo Davies Eagles.

“I was a little nervous, I’m not going to lie,” he admitted. “Stepping up to the plate, the crowd was very loud. There were a lot of eyes on me, but I found a way to put them in.”

As impressive as the run was, it was also wholly unsurprising, as Martinez, averaging over 20 points per game, has shown time and time again his ability to come through in the biggest moments throughout the 2020-21 season. His late Saturday night run led Minot on an eventual 21-9 game-clinching run after Fargo Davies’ Latrel Davis made two attempts from the line to put the Eagles ahead 59-50 with 7 minutes and 18 seconds on the clock.

This was also not the first time the Magi have met the Eagles under the brightest lights. Minot met Fargo Davies in the semifinal round of the 2017 state tournament, defeating the Eagles by a similar 73-69 final score as the West Region’s second seed en route to clinching the eighteenth title in school history.

After taking in the first half of West Fargo Sheyenne and West Fargo’s semifinal contest from the stands to get a feel for their two possible championship game opponents an hour before their game, the Magi later emerged from the locker room for the nightcap’s opening tipoff.

The game was hotly contested from the start. Michael Ross scored Minot’s first two points 38 seconds into the affairs in response to a two-point field goal from the Eagles’ Ian Motschenbacher, and Martinez added three more to give Minot an early 5-2 lead.

Following Martinez’s first three points of the evening, Wentz banked a mid-range jumpshot to extend the lead to five, and both teams went on to trade two-point baskets for the next four minutes. Ross. RaShawn Wilcox. Martinez. Wentz. Martinez. They all factored in during the table tennis-esque rally that finally ended when the Eagles’ scored four unanswered points to tie the game at 17 with two ticks over 10 minutes to play in the half.

The Magi then utilized the game’s first tangible run, an 11-4 stretch on the strength of three three-point shots by Wentz and Martinez to distance themselves from its opponent and take a 28-21 lead with six and a half minutes in the half.

Not unlike the Magi’s previous contest against Fargo North, Minot again had issues closing out the first half. On Thursday night, the Magicians were on the wrong side of a 21-3 run that helped the Spartans back into the game just before the buzzer. Saturday night was no different, as the Eagles took a 37-33 lead at the half with a 16-5 stretch.

“We didn’t match their energy,” head coach Dean Winczewski said. “We got a lead and they picked up their intensity and they took it at us, and we didn’t respond. I don’t think we responded until really the last five or six minutes of the game, and then our kids did everything that they needed to, especially Deonte’.”

That they did. The Magi did everything in their power to claw their way back into the game in the second half. Brady Sauvageau and Raymond Brown scored three more points for the Eagles before Wentz landed a counterpunch with a three-point shot and another layup, and Ross later banked in a layup of his own to keep things tight at 43-40.

Owen Hektner ignited a 14-8 Fargo Davies run with a three-point shot, and things were looking bleak for the Magi, trailing by 11 with eight minutes to play.

Ross went down hard trying for a contested layup and was fouled on the play. He got back up and sparked the rally Minot had been looking for all night long with two made free throws to close the gap to nine, and following two more Eagles free throws, Martinez took over.

“They’ve been counting us out all season,” Wentz said. “I bet everybody in the gym, with four or five minutes left on the clock and they were up by 10 or 12, they thought we were counted out again. But that’s just not Minot High basketball.”

Wentz was one of only four scorers on the night for the Magi, making 20 points on 9-of-13 shooting from the field. Martinez’s 28 points led his team, shooting 10-of-19 and making seven of his eight tries from the line. Ross’ 13 points and Wilcox’s 10, including a clutch make from beyond the arc to give Minot a 64-63 lead with two minutes to play, rounded out the scoring.

The win clinched Minot’s first appearance in the state championship game since it completed its three-peat in 2017. Its opponent was the West Fargo Packers, who had wrapped up a five-point win against West Fargo Sheyenne minutes before Minot’s contest tipped off.