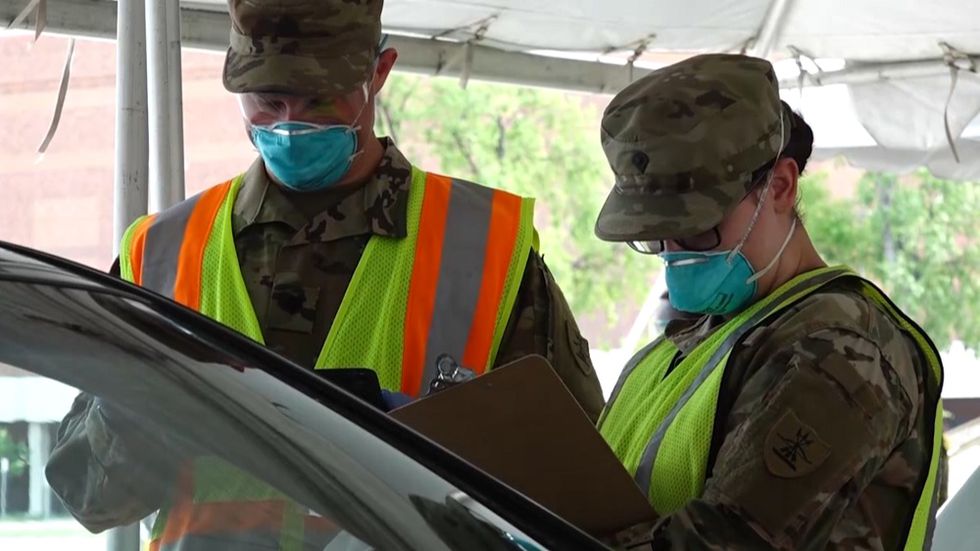 MINOT, N.D. – The North Dakota National Guard are on their longest domestic mission and expect to hit a 100,000 personnel days this month.

The pandemic is the guard’s longest domestic response, passing the hours spent on 2011 flood relief in November.

North Dakota’s guardsmen and women give time away from their lives and jobs to serve the state, and they’ve played a number of roles since the pandemic began a year ago.

Mass testing sites became a common sight as kits arrived in the state.

“Testing is part of the answer to the puzzle we have,” said Gov. Doug Burgum, R-ND.

“We’re providing supplies to healthcare entities across the state to insure that anyone who is symptomatic and wants a COVID-19 test can get a COVID-19 test,” said Maj. Gen. Alan Dohrmann, ND Adjutant General.

Deputy State Surgeon Col. Brian Keller has been part of response since the first site was set up in Amidon on April 4.

“We just kind of did it on the fly, we did it using paper, and carbon paper. It was very good, but we took almost all day to do the number of people that we can probably do in three or four hours now,” said Keller.

Since then, they’ve adapted to using tablets and more rapid tests, helping them process thousands of people in a day when needed.

“The hours that you put in was challenging. Personally, for me standing on my feet on concrete hurts your legs and your back,” said Keller.

Troops helped not only on the frontlines with testing, but also in the lab where guards helped process the tests.

“The motto is always ready, always there, and we always pride ourselves on being very adaptive and creative in finding the solutions to tough problems,” said Dohrmann.

They’ve been used wherever the state needed extra staff as couriers running samples, or training in testing staff like the Minot fire department.

“I’ve been to towns that I didn’t know existed, and towns that I knew existed and have never been to. I’ve gotten to visit a lot of the towns in North Dakota which is really cool. The people of North Dakota are awesome,” said Keller.

A year later, they’re still helping across the state, as the National Guard expects to reach a 100,000 personnel days by the end of March.

“Our first pandemic in a hundred years. This was new for everybody, even those that were career public health officials. You talk about a pandemic, you plan for a pandemic, but I think until it gets here and you see all the challenges that are presented you don’t know what’s going to happen day to day,” said Dohrmann.

Some of their effort are now supporting vaccinations.

“The people coming through these vaccination lines are so happy, so thankful. It’s just fun to be able to visit with them,” said Keller.

Dohrmann said they average 300 guardsmen working on any given day. In 2021, they have run 142 vaccination sites and 193 testing sites as of March 9.

We reported the negative about COVID-19, let’s not forget the positive