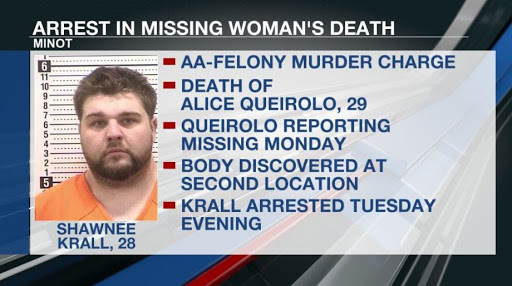 MINOT, N.D. – Minot Police said they found the body of a 29-year-old woman who went missing earlier this week and a roommate of hers is now in custody on a murder charge.

Police said 28-year-old Shawnee Krall is being held on a AA-felony charge in the death of 29-year-old Alice Queirolo.

Police said Queirolo suffered from a medical condition. She was reported missing by family Monday and never showed up to work.

After filing a missing person’s report, investigators said they found her body at a second location and took Krall into custody last night without incident at a residence, just outside city limits.

It took police just two days to make an arrest in the victim’s death from the time her family reported her missing.

“We are hoping that, even though this is not a good result, that the closure is beneficial. Now it’s just holding the person accountable for what they did,” said John Klug, Minot Police Chief.

Krall made his initial appearance Wednesday afternoon in Minot and remains in custody on a $2 million bond.

He’ll be arraigned March 4 and faces the chance of life in prison without parole if convicted.