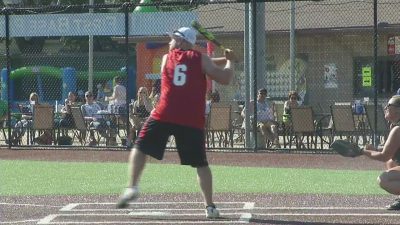 MINOT, N.D. – Saturday night is the third annual Guns ‘n’ Hoses softball game in Minot and Team Guns is hoping to get its first win against the reigning champions.

The game jerseys will be auctioned off and the proceeds will go to local charities. The Magic City Blessing Bank is the charity Team Guns picked to help out.

“In addition to two great local charities, it’s just a great way to show support for first responders in the area. And that’s our role in the Fraternal Order of the Police is to support the community that supports us, law enforcement and the communities that we serve,” said Aaron Moss, Team Guns.

Team Hoses is looking to remain undefeated against Team Guns. It chose the Muscular Dystrophy Association as its charity. Team Hoses is represented by firefighters from the Minot Fire Department.

“This year it made a lot of sense because we couldn’t do our traditional ‘Fill the Boot’ drive due to the pandemic. A lot of departments nationwide haven’t been able to hold theirs, so it makes more sense and it works out to do it that way to try and make up for that, even if it’s a little bit,” said Jon Hanson, Team Hoses.

How to prevent ‘mask acne’ while wearing your face mask