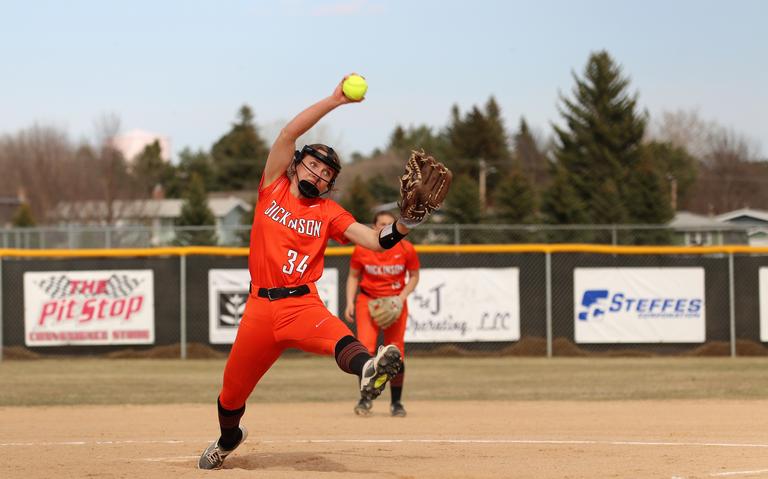 MINOT, N.D. – This week’s double header was a test for unbeaten Dickinson High School softball as they faced Minot High School, who were 7-5 in conference play and looking to give the Midgets their first loss. Every run was a challenge for both sides. Despite errors by the Midgets, the team remained undefeated as head coach Amanda Mickey call for her team to regain focus.

“…It is just the beginning,” Mickey said of the season.

The double headers started with a shutout in game one as Ava Jahner and the DHS defense kept the runs column at zero for the entire seven inning game. With Jahner on the pitcher’s mound for the entirety of the game, she showcased both finesse and power with an arsenal of pitches that garnered 13 strikeouts, only two hits and two walks.

Despite their name, Minot pulled no magic rabbit out of their hat needed to address Jahner and the phenomenal Midgets infield.

Normally a hot hitter, Reese Hauck couldn’t find success in the first game going 0-3 at the plate. Despite Hauck’s hardships Taya Hopfauf stepped up with clutch hits that brought six RBIs including a triple.

Confident Dickinson went into the second game but staggered a bit as a close 6-5 win highlighted how quickly a lapse in focus can rally the bats of opposing teams.

Game two featured six errors, nearly one per inning, in a game that took nine innings to settle.

“We had six in the last game and it is just silly things, pass balls when throwing the ball down to the pitcher. We didnt take care of the little things that we can control like we usually do and that is something that we need to focus on all the time and not let it get the best of us,” Mickey said. “That is something that we need to hold ourselves accountable for and always play our best no matter who we are playing.”

The Midgets held the lead through 5, despite the errors and fell behind going into the eighth inning at 4-5.

The better team typically wins, is an old adage that holds true. Despite the focus weigning, the team still rallied after Hauck cemented her redemption hitting a homer to tie the game in the ninth inning. Kali Kubas kept the momentum going with a triple, before Amy Fridley’s grounder brough Kubas home to seal the game.

Kali Kubas and her teammate continue to cheer their team Midgets onto a victory. (Josiah C. Cuellar/The Dickinson Press)

“I was super proud of them not letting Minot get the best of us… They came back and kept fighting and then Reese coming through with a solo home run ball was absolutely huge. She had been struggling at the plate for the first game so I am super proud of that kid,” Mickey said. “We had a few errors, but our pitchers, Ava and Decker threw really well. The poise that these kids have— not letting down and seeing it all the way to the end. It’s something you can’t really teach.”

Pitchers Jahner and Jenna Decker combined for 13 strikeouts between the both of them in the second game.

Unbeaten record still intact, Mickey recognized the work ahead for the team to be ready for regionals.

“I know we are 15 and 0, but to me that means nothing. We got a lot to work on,” Mickey said. “It’s always fun to beat Minot since we lost the title to them… but we have a long way to go and we are about to see some really good teams. Don’t get me wrong, I am proud of them and they worked really hard, but it’s just the beginning.”