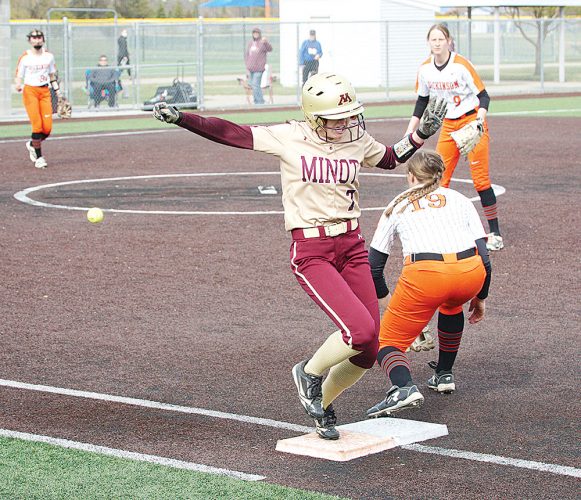 MINOT, N.D. – The Minot Majettes softball squad, having won seven of its last eight games, met Dickinson High school for a doubleheader Tuesday afternoon. The Midgets took both games, by 6-0 and 7-5 final scores.

Minot was shut out by the Midgets in the twin-bill’s opener after starter Paige Ackerman surrendered a trio of home runs, all to Taya Hopfauf.

Minot could not muster much offensively, but Aynzlee Mosser did record three hits in the losing effort.

The two teams engaged in something of a slugfest in the nightcap, and the Midgets rode a hot start to the early lead. Kali Kubas scored on an error by catcher Abby Barnum in the second inning, and Reese Hauck hit a third-inning RBI triple and later scored on a passed ball to give Dickinson a 3-0 lead.

The Midgets tacked on another in the top of the fifth, and the Majettes drew up a late-inning response in the bottom half. Pitcher Kirsten Galloway led off with a walk, and Kinsey Fjeld and Ackerman later hit back-to-back singles to help cut the deficit to 4-2.

The Majettes added three more over the next two innings, including two clutch seventh-inning home runs by Ackerman and Cierra Erickson to tie the game at five.

The two squads battled for two more innings, and after neither could score in the seventh, Dickinson took a ninth-inning lead on a solo shot, a triple and RBI single to seal its 7-5 victory and the doubleheader sweep.

Minot will return to the diamond Friday afternoon against Bismarck Century at South Hill Softball Complex, with first pitch scheduled for 4:30 p.m.