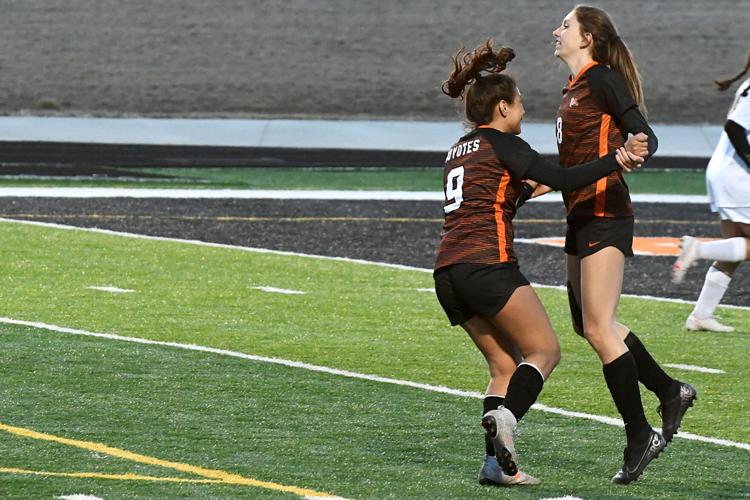 MINOT, N.D. – The Williston High School junior varsity one (JV1) girls soccer team played well and had a nice late push in their game on Tuesday, April 20 at home, but they could not get quite enough momentum to make a comeback.

Williston lost 4-2 to Minot High School in what was a very close match for most of the game.

The Lady Coyotes’ defense worked hard and defended well against a balanced and fast Minot attack, and the Lady Coyotes’ attack was able to create opportunities of its own.

The game remained scoreless for more than half of the first half, but one of Williston’s leaders and best scorers, sophomore Jessica Ortiz, made sure to end that scoreless tie.

Williston pushed the ball up the far sideline of the field and got the ball into the Minot penalty box.

After a few players from both teams tried to corral the ball, a Minot defender accidentally hit the ball with her hand, giving the Lady Coyotes a penalty kick.

Ortiz stepped up to the challenge and converted.

She kicked the ball hard and low to the Minot goalkeeper’s left, hitting the ball perfectly at the edge of the goal out of reach from the keeper.

Ortiz is on a heck of a roll recently, as in the two games she played prior to Tuesday’s, she recorded a hat trick in both, giving her seven goals in three matches.

Minot was able to score off a corner kick a few minutes later, tying the game at 1-1, which is how the score stayed until halftime.

In the second half, the teams again remained at a stalemate for much of the half, but Minot was able to build some momentum as the half went along.

The Lady Magicians were able to score three goals in the second half, two of which came shortly one after the other.

Williston’s attack hadn’t had the same success it did in the first half, but late in the second half, the Lady Coyotes started to get things going.

They started to control the ball more and get within striking distance better, which eventually turned into another goal.

Sara Ewert, a sophomore who is another one of Williston’s great scorers, got control of the ball amongst a few Minot defenders, about 30 yards away from the Minot goal.

Ewert beat out the Minot defenders in a foot race, hitting a nice line-drive shot toward the Minot net. The ball was hit hard enough and just far enough out of the Minot keeper’s range that it hit off her hands and rolled in for Williston’s second goal of the game.

After Ewert’s goal, Williston was able to apply some more pressure and create some buildup for more opportunities, but Minot’s defense held strong for the last minutes of the game.

Overall, the Lady Coyotes played well on both sides of the field, and they showed that they are continuing to improve so far in this young season.