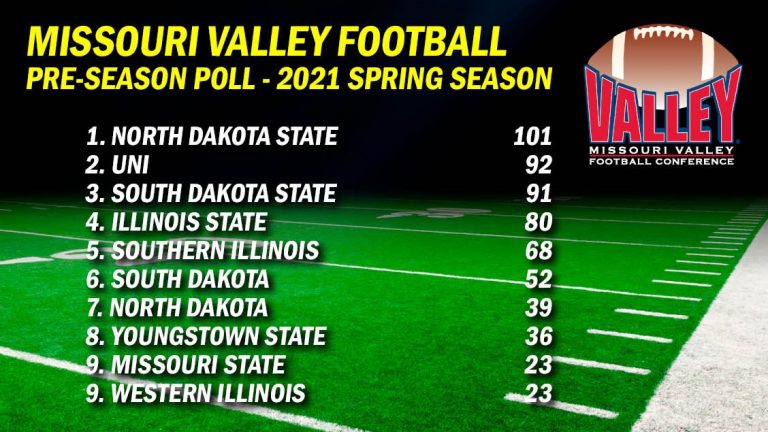 N.D. – North Dakota State has been tabbed as the Missouri Valley Football Conference preseason favorite in a poll conducted by league coaches. NDSU has been picked first in the pre-season poll for nine-straight seasons.

After winning its lone game in the fall, NDSU has won a league and FCS-record 38-straight games. North Dakota State has earned the league title for nine-straight years, four times sharing it with another league school.

This year, NDSU received 101 points in the coaches vote to edge UNI (92) and South Dakota State (91). Illinois State and Southern Illinois round out the Top 5 in the poll with 80 points and 68 points, respectively. South Dakota (52) is next, followed by the newest member of the Conference, North Dakota, with 39 points for 7th. Youngstown State (39), Missouri State (23) and Western Illinois (23) round out the voting.

A pre-season favorite has claimed the league crown 22 times (in 34 previous polls). North Dakota State was picked to win the league last season, and the Bison earned both the league title and the national title (following a 28-20 win over James Madison in the NCAA Division I Football Championship game in Frisco, Texas). In 2019, the league fashioned a 27-19 non-conference record and won the Big Sky-MVFC Challenge Series for the third-straight year.

After going 2-3 against ranked opponents in the fall, the MVFC has had at least one win against a non-conference ranked opponent every year since going 0-4 in that space in 2004.