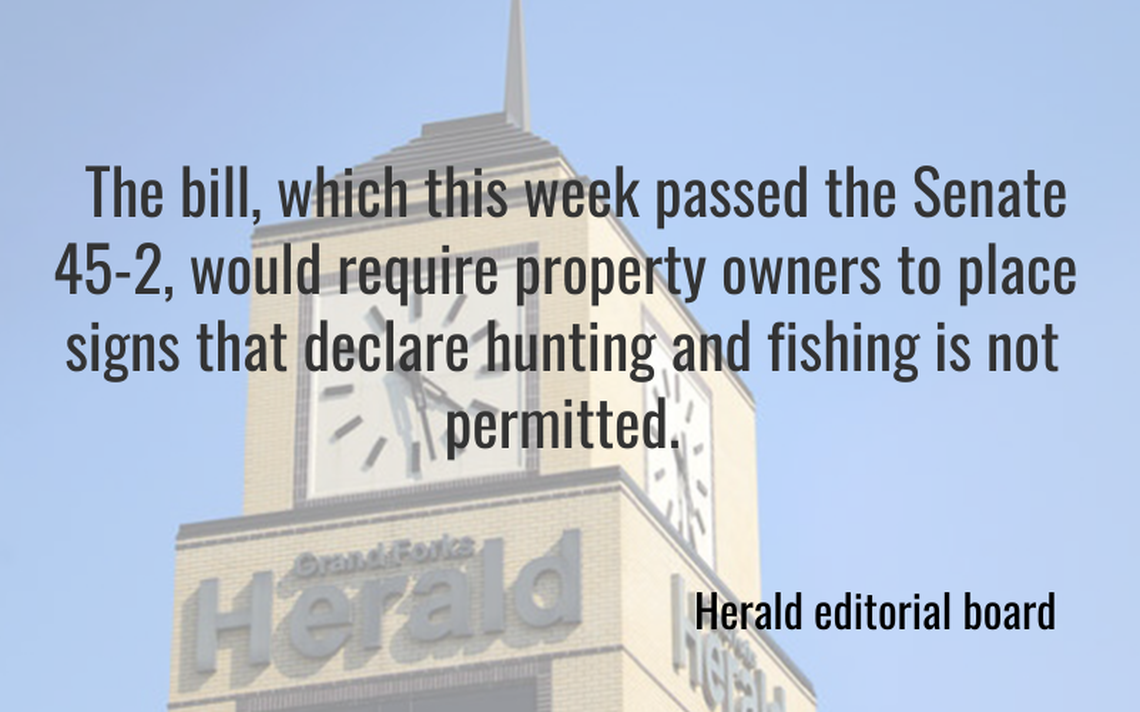 N.D. – In 2019, a Herald editorial sarcastically declared: “North Dakota homeowners, be sure to post ‘no trespassing’ signs on your front door, lest would-be intruders feel it’s OK to make themselves welcome in your parlor. Same goes for your businesses and vehicles. Actually, don’t bother, because everybody knows it’s wrong to enter someone’s home without an invitation, or a store after business hours. Signs, therefore, are unnecessary and would be an inconvenience to the property owner.”

The point was that North Dakota needs a similar assumption of privacy on rural property. At present, hunters are allowed to enter unposted private lands without first getting permission. It’s an anomaly – in most states, including Minnesota and South Dakota, private lands are assumed to be closed, even if not posted.

The process required to hunt private land in those states? Hunters seek verbal or written permission from the landowner. It’s old-fashioned, but effective.

As noted in past editorials, the Herald has sided with landowners, arguing that land should be assumed closed if hunters and anglers have not first secured permission. Many note that getting permission – especially as farms are more spread out and sometimes owned by people who do not live nearby – isn’t always easy.

Now, a compromise is being discussed in the Legislature. Senate Bill 2144 would, among other privacy-related points, add a wrinkle of responsibility for both sides while helping landowners declare their property is, at least without permission, off-limits.

The bill, which this week passed the Senate 45-2, would require property owners to place signs that declare hunting and fishing is not permitted. The name of the person posting the land would be required on those signs, placed no farther than 880 yards apart.

Or, the property owner or tenant can designate the land as posted “in an online database or other electronic application maintained or authorized by the state and available to the public which identifies whether land is available to hunters.” The name of the person posting the land would be required, as well.

SB 2144 also has some teeth: Hunters who cross onto land that’s e-posted could be found guilty of accessing posted land without permission. It could result in revocation of hunting or fishing privileges.

Importantly, fenced property that is not posted would be closed to everyone except those who are legally hunting or fishing.

This is a good compromise, so much so that even the North Dakota Wildlife Federation has given its support.

“Our members want better hunter-landowner relations, and we believe e-posting along with the continuation of physical signs are good steps to achieving that goal,” John Bradley, executive director of the North Dakota Wildlife Federation, wrote in testimony provided to the Senate Energy and Natural Resources Committee.

It provides landowners with a means to show their property is not open to access, but also still allows hunters and anglers to access land that is not posted or not entered into the database. Meanwhile, it makes it clear who owns the land and quickly and clearly tells others they must contact the owner or tenant to secure permission to hunt there.

It’s a step toward a solution to longtime arguments in North Dakota about property openness and trespassing debates.