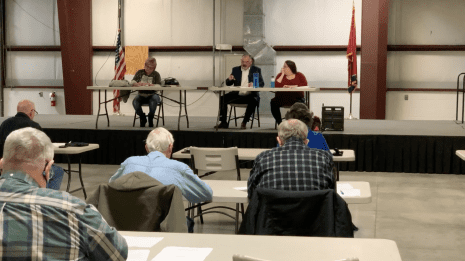 A special meeting was called by Ward County Commissioners to determine the next steps for the facilities.

“We have to be extremely careful that this stuff doesn’t get into where we have to run this election. If we have to shut that down, we’re going to hurt bad,” said Alan Walter, Ward County Commissioner.

On Tuesday, Ward County Commissioners voted to re-open Ward County buildings on May 26. After getting results from a recent mass testing operation, county commissioners met to discuss if that date is still a good idea.

Forty-five staff members at the detention center were tested and six came back positive.

So far, of the 20 employees at the Sheriff’s Department, three have tested positive, and the county is waiting for more results.

One of the main concerns of re-opening, is election staff getting infected.

The staff who tested positive have not been in the auditor’s office and all of the positives were asymptomatic.

“We cannot have all that staff quarantined that were contacts in our detention center because we still need to staff that facility,” said Tammy Terras, HR Director, Ward County.

Commissioners voted unanimously not to reopen on May 26 and will re-visit re-opening at their next meeting on June 2.

The commission also voted to make election staff essential workers until after the election is certified so that they can be prioritized when it comes to COVID-19 testing.

A mass testing event is scheduled for May 29 to test inmates, jail staff, the Sheriff’s Department and Minot PD.

The Highway Patrol office is set to re-open Tuesday, May 26.

Park board candidate Justin Hammer looks to get involved