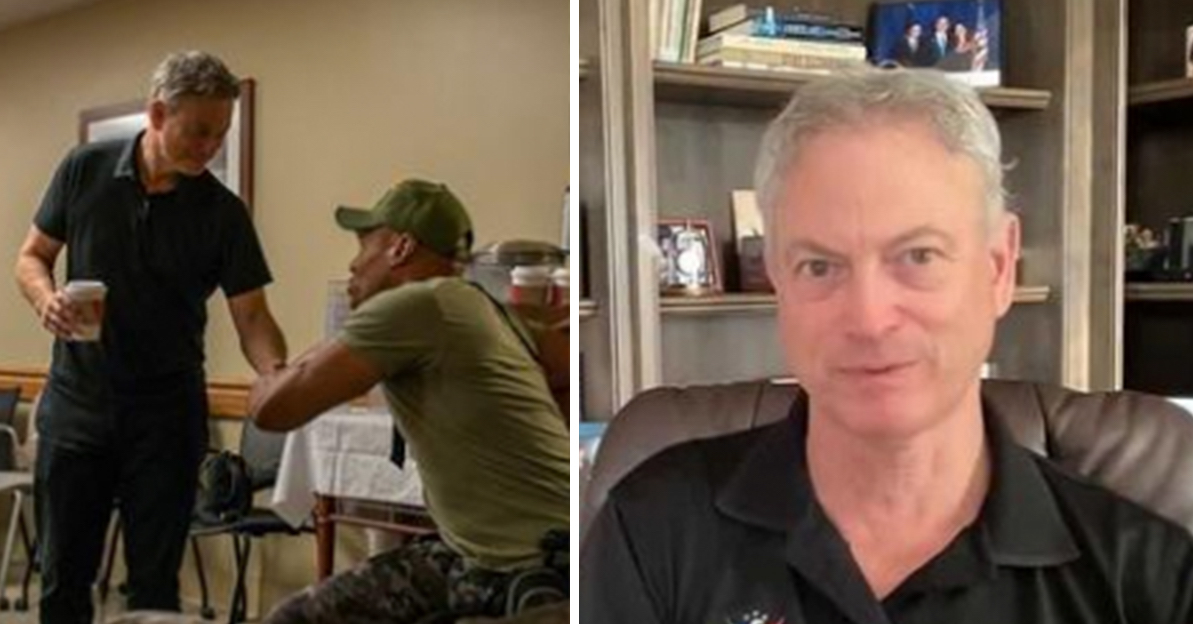 When it comes to celebrities who honor and respect veterans in the US, few can compare to Gary Sinise.

The much-celebrated actor is known for his staunch support of the heroic men and women who serve and who have served in the military. A quick Google search will produce no end of examples of his generosity, particularly where veterans are concerned.

Whether it’s building custom homes for vets who lost limbs in service to their country, flying the families of fallen military heroes to Walt Disney World, or raising money for his veterans foundation by auctioning off his own things, Sinise has garnered quite the reputation for showing appreciation for those who put their lives on the line in the name of freedom.

Since it was Veterans Day this week, it’s no great surprise to see the 66-year-old’s name once again linked in the media.

As it happens, Sinise wrote a lengthy piece for Time Magazine, wherein he outlined how we can all better help to honor veterans, as well as the importance of trying to do more for them.

He wrote: “After playing Lieutenant Dan Taylor in the 1994 film Forrest Gump with Tom Hanks, I found that I shared an important connection to these brave men and women. The character was a proud soldier whose ancestors had died in every war in United States history, and he was defined by his dedication to his country.

As someone with Vietnam veterans in my family, I remember all too well what it was like for them to serve in combat and then come home to a nation that had turned its back on them because of the unpopular war they had served in. Many felt forgotten and disappeared into the shadows. This experience was reflected in the film, and the role became a catalyst for my work as an advocate for the veteran community.

In 2003 I began volunteering for the USO, traveling to Iraq, Kuwait, Germany, Italy and back to Iraq a second time that year. It was a way that I could support my country by supporting those who were willing to fight back after the terrible attacks of Sept. 11, 2001.

Reaching out to various military and veterans nonprofits to offer support, raising funds and awareness became a way for me to make a difference and reach more of our nation’s veterans. Just wanting them to know they were not forgotten became a full-time mission. A mission that has continued to this day.”

Sinise went on to highlight that he is ever trying to find new ways to shine a light on the needs of veterans, explaining just why it’s imperative that they don’t feel abandoned or forgotten about once their service is done.

The actor continued: “There is only a very small percentage of our population who defend us all. As private citizens, I believe we have an important role to play in supporting our veterans, as we are the beneficiaries of the freedom they fought to protect.

If we don’t support them, why should we expect anyone to continue to volunteer to serve? It’s imperative that we care for them before, during and after the battle.”

To finish, Sinise stated his wish that we all start to consider the ways in which we can honor, respect, and ultimately assist veterans in our community.

His article concludes: “Very simply, if every citizen in every neighborhood in every town and city in every state would make it a priority to celebrate veterans each day by seeking out those who may be in need of assistance because of their service and stepping up to support them, the difficult issues and challenges facing our veterans would be greatly reduced.

To all our veterans this Veterans Day holiday, thank you.”