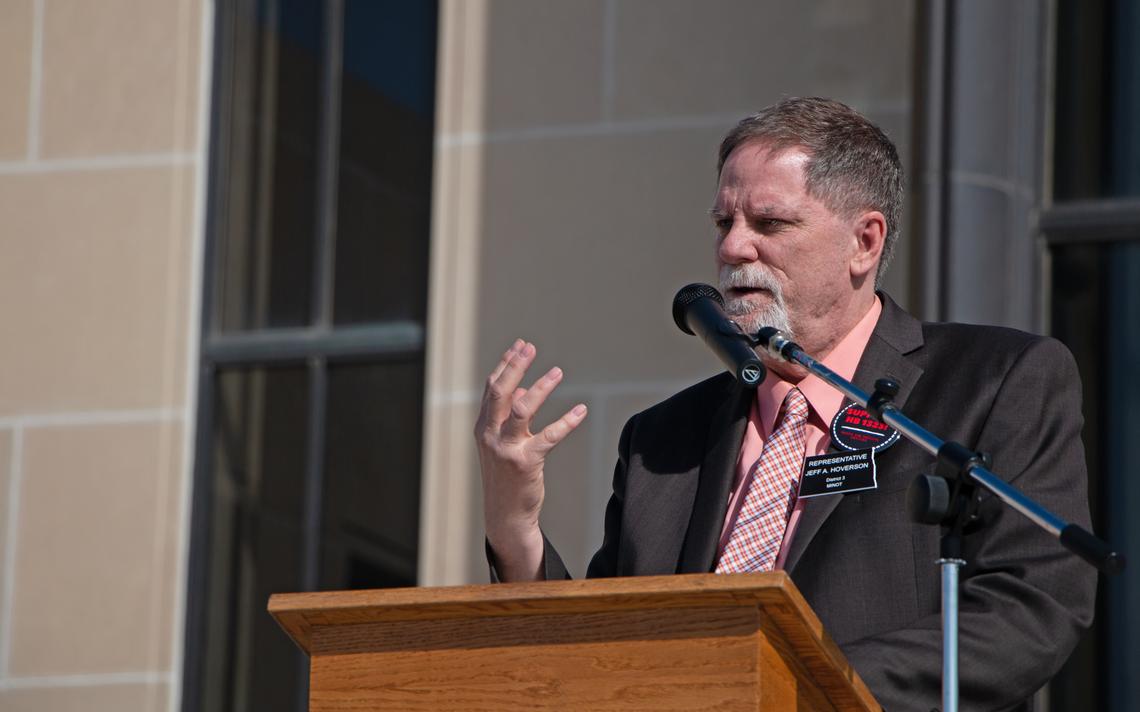 MINOT, N.D. — Earlier this week a hundred or so deeply misguided souls rallied at the state capitol in favor of legislation, House Bill 1323, which bans state and local government from implementing a mask mandate.

Which, of course, is no mandate at all.

The bill is the cloyingly stupid conception of Bastiat Caucus lawmaker Rep. Jeff Hoverson, R-Minot, and I’m surprised it passed.

As we all know, legislatures often make stupid laws.

Thankfully, our system of government has checks and balances. The bill needs Gov. Doug Burgum’s signature, and he shouldn’t give it.

In fact, he should veto this nonsense. The legislature is unlikely to override a veto. Doing so requires a 2/3’s majority vote and this stinker got just 50 of 94 votes in the House, and just 30 of 47 in the Senate.

Majorities, yes, and a sad commentary on the degree of erudition present in those chambers, but not enough to overturn a veto.

Burgum doesn’t have the bill in front of him just yet — there are some differences between the versions of the bill passed by the House and Senate so a reconciliation process will need to square them up — but he’ll probably get it eventually.

When he does, I hope he throws the bill in the trash. Figuratively and literally.

What’s frustrating is that the people who rallied for this bill — a noisy minority, I believe — are wrapping their cause in the cloaks of liberty. As if something as simple and inexpensive as wearing a mask during the outbreak of an airborne virus like COVID-19 were akin to sending people to the gulags.

These people rant about our military veterans and our founding fathers and the freedoms they fought for as if a mask mandate were in any way comparable to the privations of freedom they fought to overturn.

Even if you believe that masks were ineffective for the COVID-19 outbreak — which you shouldn’t because it isn’t true — this law wouldn’t just apply to the present situation. It would apply to any future public health emergency, denying our elected leaders and public health officials a tool they can use to keep our communities safe.

Truth be told, mask mandates never should have been necessary. Rational people should have chosen to wear masks because all available evidence suggests they help, and even if they don’t, what does wearing them really cost us?

Unfortunately, mandates were necessary, because we live in a society where people would rather listen to ranting Facebook demagogues than someone with a medical degree and training in epidemiology.

One of the great challenges of our modern society is how to protect ourselves from the overweening whims of populist politics, fueled as they are by social media. That’s a problem bigger than this idiotic campaign to be free … of perfectly reasonable and effective public health policy, but big problems grow from tiny seeds.

Burgum can, and should, kill this seed before it germinates, and he needn’t worry about the political repercussions because, again, the people pushing this balderdash are not anything approaching a political majority.

Fargo Health officials open up vaccinations with no pre-registration

‘The Broadway Circle’ taking shape for families in need in Minot