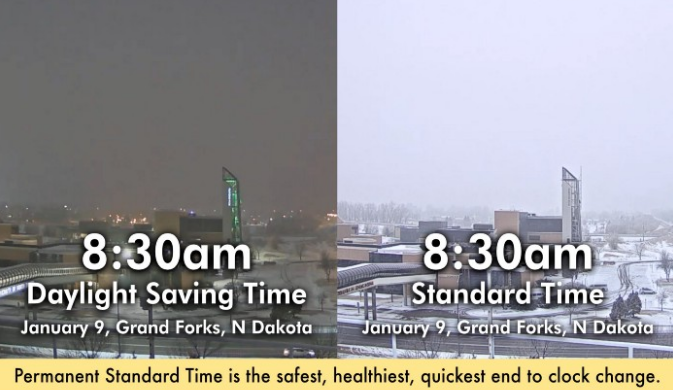 N.D.– A senate committee has recommended a bill that would keep North Dakota on Daylight Savings Time year-round, if and when Congress approves, and when our neighboring states adopt it as well.

During a hearing before the Senate Political Subdivisions Committee, a representative of the group “Save Standard Time” urged the Committee to amend HB 1371, so that North Dakota would stay on standard time year-round. Jay Pea of San Francisco said there’s a reason many states don’t observe daylight savings time in the winter.

“This bill would delay North Dakota sunrise until past 8 am DST for up to five months,” Pea said. “Most school and work days begin at 8 am, so for nearly half the year, this bill would force hundreds of thousands to start school or work in the dark.”

Pea said many may not see sunlight until lunch, or at the end of the day.  That’s depressing and dangerous,” Pea said.

But Sen. Judy Lee of West Fargo countered that even on standard time, people are going to work or school in the dark during winter.

“The good thing about Daylight Time is having longer daylight, so you don’t have to go to bed in the dark,” Lee said. “When I get up in the dark in the morning in the winter, I know it’s going to get better because I’m going to have daylight for most of the time that I’m up.”